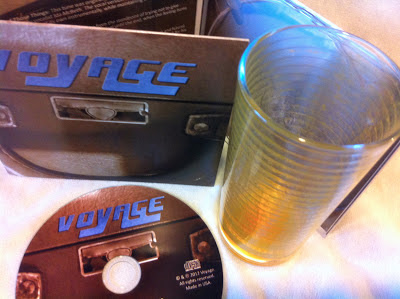 Opening an album with a ballad takes gumption.  The unconventional strategy works on Voyage, the self-titled album by a quartet of Kansas City musicians.

The selection's superb musicianship, sensitive interplay and formidable compositional sensibility showcase the quartet's strengths. Their eminently listenable album is polite but not mild-mannered.

Voyage's mainstream post-bop tone will be familiar to listeners who appreciate classic Bobby Watson albums like Present Tense.  The similarity isn't an accident.  Anyone who's attended a jazz function at the University of Missouri-Kansas City during the past several years likely noticed a slender man standing alongside the famed Watson.  That's Thomas.  Like Watson, Thomas is both a respected UMKC instructor and a powerful saxophonist.  He's the yin to Watson's yang.

Four of Voyage's nine tracks are Thomas' compositions.  The brash "Shock and Awe"- my favorite selection- is a chaotic maelstrom.  Thomas' virtuosity is also responsible for the album's weakest moment.  His primary solo on Hawkins' "Brazilian Haiku" is a technical triumph. Impressive?  No doubt.  Emotionally resonant?  Afraid not.  It's the only track on which the band resembles inhibited music professors.

Thomas may be the dominant voice on the album but Voyage is a true band.  Warren is one of Kansas City's most distinctive drummers.  Voyage serves as an excellent document of his playing.  Stewart locks in with Warren throughout.  The soulful groove of his "I'll Miss All of Those Things" makes it one of the album's strongest tracks.  His solos on Hawkins' "Truth and Beauty" and Thomas' "Lamenting" also impress.  Hawkins' nuanced contributions reinforce Voyage's enticing ambiance.

Voyage was released to little fanfare last September.  It deserves to be heard.

(Original image by Plastic Sax.)
Posted by Happy In Bag at 11:57 AM