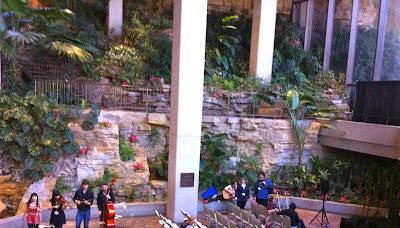 *The UMKC Conservatory of Music and Dance received a $500,000 donation from Sid and Carole McKnight.

*Pat Metheny was featured on the radio program Here and Now.

*Marc Myers reports on the death of Med Flory, one of the principal members of Supersax, the Charlie Parker-oriented band that also featured Ronnell Bright.

*Tweet o' the Week: Steven Lambert- #broadwayjazzclub March 26th, I'll be recording a LIVE album! Come be part of the magic, if you dare! Eight pm!

*From a press release: After taking a break from an extensive musical career of 43 years, renowned Kansas City performer Ida McBeth has decided to make the Broadway Jazz Club her new home. Mcbeth will be performing at the Broadway Jazz Club on March 29 (6:30-9pm), April 19 (6-9pm), and May 3 (6-9pm). She will perform exclusively at the club twice a month. Future dates will be announced as they approach.  "I'm hoping that they're ready for me because I'm ready for them. I want to hug every last one of them, I wish I could!" says Ida McBeth as she discusses her dedicated fan-base and the upcoming dates at the club. McBeth is ready to entertain fans at the Broadway Jazz Club with well-loved songs from her discography as well as various selections from traditional jazz musicians. McBeth will be accompanied by her band of several years…

(Original image by Plastic Sax.)
Posted by Happy In Bag at 11:45 AM

This links includes a mock-up demo of the latest composition I have written. It will be on my sophomore recording and will released worldwide on our ARC label. We go into the studio in June. A band of heavies ... Will keep you posted.