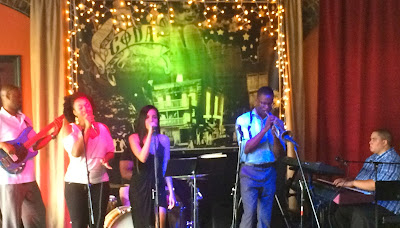 Many respectable members of Kansas City’s jazz community would insist that the music I heard at Coda on Saturday wasn’t jazz.  Maybe they’re right.  Yet I’d rather hear Shades of Jade’s version of soul than a musty recreation of the music of yesteryear.

I’m excited by the current output of José James, Bilal and Esperanza Spalding’s Emily’s D+Evolution project.  Most mainstream jazz that reverently hews to tradition seems less than inspiring in 2015.

That’s partly why Shades of Jade’s melodic original compositions and covers of material by the likes of Musiq Soulchild struck me as meaningful on Saturday in spite of the absence of an audience.  I had the band almost completely to myself.  The sextet presumably played to a packed house at Phoenix Fest later that night.

Shades of Jade wasn’t perfect.  When I told bandleader Josh Williams at the break that he and keyboardist Desmond Mason seemed to be pushing toward jazz while the other four members of the group were pulling toward R&B, he agreed that the new lineup hadn’t completely coalesced.

The two vocalists seemed to have Lauryn Hill in mind as they sang while Williams and Mason may have been going for the sound of D’Angelo’s band.  Jazz chops occasionally clashed with a more regimented sensibility.

I didn’t mind.  I currently prefer a flawed version of jazz-informed R&B to a perfect replication of 1955-era swing.

(Original image by Plastic Sax.)
Posted by Happy In Bag at 6:16 PM

To each his own. I currently prefer any type of replication of 1955-era swing to a flawed version of jazz-informed R&B!

That band has always been a really half baked imitation of R&B influenced jazz that's too pretentious to call itself smooth jazz. Crap.

If you're going to talk shit about our band, at least don't be a coward by hiding behind this "anonymous" cover.

Ignore the trolls. I won't deny that I prefer my music a bit more "old school". But Shades of Jade is made up of humble dudes that play their tails off and combine to make some really incredible collective original music. You don't get invited to open up for Earth, Wind, & Fire and Chicago by being a "half baked imitation". Keep on doing what you do Josh, Des, Perry, Derrick, and crew!

We respect and appreciate Shades of Jade. You're good for Kansas City and the scene and we look forward to seeing you continue to grow and gain even more national recognition. Kansas City loves you and Green Lady loves you. Anonymous posting may be appropriate if one fears retribution when "speaking truth to power" but when used to needlessly insult fellow human beings it's cowardly, unkind and so often and in this case untrue. We all make mistakes and are sometimes too harsh but Anonymous poster you can make amends by simply removing your post.