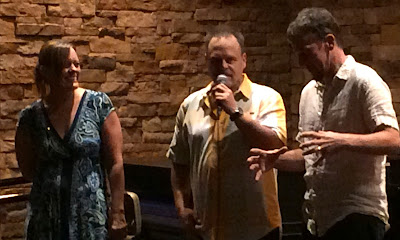 “Coffee is coffee and food is food but this is something different,” Lori Chandler said Friday at Take Five Coffee + Bar.  “It's the community that makes all of this worth it.”

Chandler was speaking from the stage of her venue in Overland Park.  Stan Kessler, the evening’s bandleader, had requested that Chandler and her husband Doug stand with him as he offered his gratitude to the couple for creating the area’s best jazz listening room.

As previously reported, Take Five will close after a performance on August 15.

Chandler encouraged the members of the audience of about 50 to continue to support the musicians she’s featured at two incarnations of Take Five since 2010.

“My plea to you guys is to find out where they're playing and go listen,” Chandler said.

Finding appealing options will be more difficult.  In addition to providing an excellent environment and a superb sound field, Take Five boasted a notably adventurous calendar.  It’s unclear if other spaces will be willing to take chances on left-of-center touring acts like Trio M and Avishai Cohen.

I almost certainly wasn’t the only person present Friday who opted for a performance by a band billed as the Kessler-Embrey Conspiracy at least partially because the show was taking place in a room where conservations wouldn’t overwhelm the music.

Chandler has indicated that she intends to reopen Take Five at a different location.  Until then, Kessler and his band mates may be challenged to find equally attentive audiences in comparably accommodating rooms.

(Original image by Plastic Sax.)
Posted by Happy In Bag at 12:37 PM