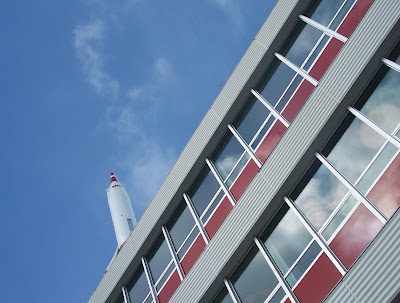 (Original image by Plastic Sax.)
Posted by Happy In Bag at 1:41 PM

Are you aware that Will Matthews plays guitar in the Basie Band?

Yes, Marshall. And that's part of my point.

I'm very concerned about the audiences of tomorrow.

You're keeping timeless music alive, of course, but the people who remember Basie as a cultural force are inevitably dying off.

Will future generations "get it"?

It's an honor to have you check in, BTW.

Alright, I can dig that. I've often thought that Basie needed to update and record with Ledisi, or somebody else to bring in a young audience.

But basically man, it doesn't matter, there is not much of an sudience for jazz or smooth jazz at this point, record sales are below 1 point, and smooth jazz stations are even dying off, and no one wants to go hear re-hashed jazz music, as Miles said years ago, watching people play a melody and then play solos is some boring sh**.

So what's the answer? There is none, Jazz is not the popular music and hasn't been for some time, people don't dance and party to it, so it will be regulated to concert halls, and historical type works.

My big point is that Will, myself, and others, cannot get enough work to make a living off of our name, but the Count Basie band, Duke Ellington etc, can bring us tours and record dates. I live in the NYC area, and cats like Vincent Herring, Antonio Hart, Mark Gross, etc etc, don't have an overwhelming amount of work, or large record sales if they even have a record deal at all anymore, so we all have to go with the established name that brings work.

There is not enough sales or money, to back jazz, or bring any of us work, and money is the bottom line.
Will or myself will not be able to establish enough rep to demand long tours and gigs and the such. Even the established cats around the NYC area are fighting for those. So that's why we are proud and happy to play in the Basie band because it's one of the last few jazz gigs with reputation that has work to give us.

This is a great topic because it is so relevant to the state of the music today.

People who are mine, Will's and Marshall's ages were not even alive during the "golden age" of jazz that institutions like Basie, Ellington, etc. perpetuate. Granted, we are closer to that era than the generation after us. But, still, not many musicians living and actively performing today were of age to have played with those leaders in their own time.

I personally do not believe that the economics of jazz have ever been very prolific. RIAA sales stats even support that the music was never the most popular music in a commercially viable context.

There is a lot of great music being made TODAY too. I don't think it has anything to do with the "style" of jazz one plays. The Basie Band keeps that legacy alive, but they are simultaneously a premiere modern group of some of today's finest musical artists (regardless of genre).