Stefon Harris at the Folly Theater 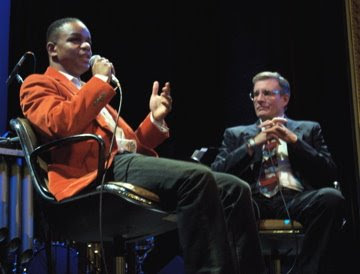 "Music is just a science of organizing sound into emotion," Stefon Harris said before he performed for an audience of about 300 Saturday night at the Folly Theater.

The concert was so affecting that a prize committee might wonder if Harris should be recognized for outstanding achievement in the category of music, science or psychology.

As Harris acknowledged in a fascinating pre-show "Jazz Talk" with Doug Tatum, his work with Blackout renders musical boundaries irrelevant.

"We're the hip hop generation," Harris said. "It would be a shame not to include that."

He freely admitted to admiring Rihanna, Radiohead, Coldplay and Kanye West. The contemporary awareness showed. The evening's highlights could have be mistaken for instrumental tracks from a classic Stevie Wonder session.

Keyboardist Marc Cary was responsible for much of the group's most intriguing sonic textures. Drummer Terreon Gully acted as a ridiculously efficient groove machine; young bassist Earl Travis was compelled to merely tag along.

Harris' athletic work on marimba and vibraphone- "it's just a bunch of metal and wood" he noted- was always in the service of the ensemble.

"It's not my sound," Harris said before the show. "It's our sound."

Maybe so, but the show's surprise standout was tough tenor Logan Richardson. The former Kansas Citian was subbing on the gig.

"It's extremely honest and open with emotion," Harris said of Richardson's approach. "It's riddled with all the conflict and grit that he has."

Based on his memorable performance Saturday, Richardson deserves a spot among Kansas City's saxophonist elite.

(Original photo of Stefon Harris and Doug Tatum by Plastic Sax.)
Posted by Happy In Bag at 9:41 AM