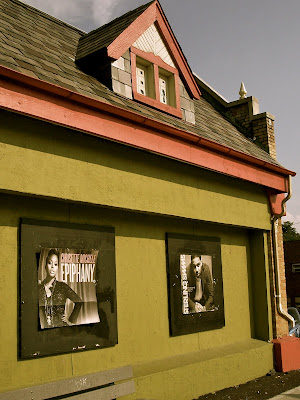 *NPR's A Blog Supreme has initiated a meme: name five albums you would recommend to somebody looking to get into modern jazz -- within the last 10 or so years, with an emphasis on the present moment (considered broadly). What's some music that's uncompromisingly musical, but also perfect for those open-eared listeners who aren't hopeless jazz nerds?

Naturally, I couldn't resist playing along. In keeping with the regional focus of Plastic Sax, I limit my selections to artists with Kansas City connections. Even so, I'll proudly place my list against anyone's. I've also added a "Recommended If You Like" component to my suggestions.

4. Kevin Mahogany- Pride & Joy (2002)- This fine set of Motown covers is an ideal choice for this exercise. For fans of Anthony Hamilton, Michael Jackson and the Temptations.

*Hermon Mehari, trumpeter for Diverse, explains his decision to attend UMKC in a promotional spot for the university.

*The new season of the Topeka Jazz Workshop is underway. They've secured several of the top names in traditional swing music, including Banu Gibson, Scott Hamilton and Tierney Sutton. The booking that most intrigues me is an October 25 date showcasing Ingrid Jensen, Jon Wikan, Roger Wilder and Jeff Harshbarger.

*"Look for the R Bar to have live blues and jazz music on Fridays, Saturdays - and if things go as well as hoped - Thursdays," Hearne Christopher notes in a preview of the R Bar.

*"Releasing Jazz From Aspic" is the title of a typically thoughtful essay from local music writer Joel Francis.

*A Monique Danielle album is reviewed by Mark Edelman.

*Chris Burnett is the latest artist to join the fan-funded recording process.

*From his new home in Washington, Andrew Zender offers an insider tip for a September 19 show at the Blue Room. He also has a NPR meme list.

*Steve Penn previews the new film exhibit at the American Jazz Museum. And a television reporter errs when she asserts that it "showcases never-before-seen clips of legendary jazz performers." As I've repeatedly suggested in this space, most if not all of the material is also available elsewhere.

*A Plastic Sax tipster informed me that the former location of Cafe Trio will soon reopen as The Rhythm Bar. Jazz will be part of the concept.

(Original image by Plastic Sax.)
Posted by Happy In Bag at 11:29 PM

I didn't read your post past Diverse accept to notice the reference to Metheny/Meldauh. Is "Young Lion" still a valid designation. The music reminds me of such used-to-be-young-lions as Marcus Printup, Kevin Hays, Jackie Terrasson and Wallace Roney.

Everything new is old once again.

I'll add that what I heard of Diverse I liked.

Back on the subject of waning support for jazz, tying w/the NEA report, Terry Teachout essay, etc., I came across this site:

In employing the (admittedly tired) phrase "young lions," UL, I merely intended to convey a sense of fearlessness and, well, youth. I'm not suggesting that Diverse is the next-big-thing or that they represent a revolutionary force on the scene. That said, I like 'em. Furthermore, their accessible debut album is a nice fit for this list.

No doubt. "Young Lion" was passe 20 years ago. Some might argue that the entire concept of "Young Lions" is, by definition, throwback. In my opinion, the "Young Lion" movement was never about moving the music forward.

Alright already, UL! I pledge to never use the phrase again. I don't want this point to get lost amid the semantics discussion- perhaps what's most appealing about Diverse is their refreshing lack of self-consciousness. It's rare for a jazz album in 2009 to seem so carefree and relaxed.

Unfortunately we are going to see some personnel changes in Diverse pretty soon.