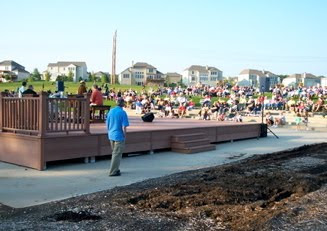 While it couldn't possible compare to the scene's heyday, the Kansas City jazz community was still vital twenty-five years ago.

Even as the fresh faces of Karrin Allyson, Kevin Mahogany and Bobby Watson were the toast of the town, world-renowned veterans like Priscilla Bowman, Ronnell Bright, Claude "Fiddler" Williams and the original Scamps were among the acts entertaining vibrant audiences in over a dozen jazz venues. And unlike today's typically staid audiences, jazz fans in the mid-eighties smoked, drank and hooked up with reckless abandon.

The soundtrack to the good times was provided by jazz acts that knew how to entertain a crowd. David Basse remembers that era- he was in the thick of it as an integral member of the City Light Orchestra.

It's no surprise, consequently, that in 2009 Basse still knows precisely how to excel in a variety of settings. He serenaded a tranquil audience of about 500 at Ironwoods Park in south Leawood on Labor Day weekend. Ably assisted by OJT and Kim Park, the setlist included tactful jazz versions of "Sixteen Tons," "Pink Champagne," "Route 66" and "Billie Jean."

Given the bucolic setting, Basse's discreet party music was perfect.

Nice props for David Basse! He was the first leader to give me serioius work on the Kansas City jazz scene when I came back home to the area to live in 2001. He was always fair with me personally, and I found him to be a genuine cat indeed. Different paths now result in the fact that I don't see much of him these days though.

Amen, Basse is a cool cat, and definitely a link to the tradition.