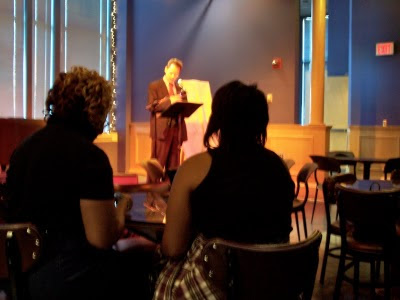 "You WON'T BELIEVE who's coming!"

I made the mistake of reading those words on the invitation to the next morning's press conference immediately before falling asleep Thursday. The odd capitalization and emphatic exclamation point inspired fanciful dreams about who would be announced as the headliners of the 2010 edition of the American Jazz Museum's Rhythm & Ribs Festival.

Would I hear the revered name of Keith Jarrett, Sonny Rollins or Cecil Taylor called out Friday morning? Or maybe the museum booked a crossover hero like Stanley Clarke, George Duke or Ramsey Lewis. Could they have snagged an undefinable genius like Herbie Hancock, Pat Metheny or Wayne Shorter? And wouldn't it be great if they featured fresh faces like Erykah Badu, The Roots or Esperanza Spalding? Such sweet dreams!

Alas, the air went out of the room when Greg Carroll, Chief Executive Officer of the American Jazz Museum, announced the headliners. The journalists and bloggers at the press conference, myself included, weren't exactly overwhelmed. After further consideration, however, I've decided that the lineup is fine. Here's my take:

Nicholas Payton
Nicholas Payton is a robust jazz trumpeter and entertainer. I recall enjoying his Louis Armstrong-themed concert at the Folly Theater several years ago. Payton will also serve as the museum's "artist-in-residence."

Tribute to Donny Hathaway: featuring Kirk Whalum and Lalah Hathaway
Although the soul singer died in 1979, Donny Hathaway currently enjoys cache with a certain type of hipster. I don't listen to him often, but I know a few people who swear by Live. Unfortunately, this concept is inspired by a new Kirk Whalum album. And based on 30-second samples, it sounds as if Whalum focuses on the saccharine side of Hathaway's style.

Hopefully, the presence of Lalah, Hathaway's daughter, will help. She sounds fantastic on a live gospel version of "The Thrill Is Gone" on Whalum's Gospel According to Jazz: Chapter 3 release. Whalum's solo on that piece, however, makes me long for Kenny G. Lalah's most recent solo album, Self Portrait, is very solid.

The Ohio Players
I wore out my copy of "Fire" as a child and I still love '70s-era funk. Still, I'm skeptical about the 2010 version of the band. Its "official website" only sells t-shirts and caps. It refers back to a MySpace account where they have only 602 friends. I'm unable to find a current listing of band members. That leads me to believe that guitarist Leroy "Sugarfoot" Bonner is the sole original member in the band.

Carroll suggested that the presence of the Ohio Players might boost attendance to 12,000-15,000. I'm not so sure. Funk stars Cameo attracted 4,000 to Parade Park at the American Jazz Museum's tenth anniversary street festival three years ago. (Here's a review and a photo essay.) That excellent event was free, however, and Cameo is probably a bigger draw than the Ohio Players. Advance tickets to this year's event are $18.

Talented blues and jazz acts drawn from the region will undoubtedly provide additional balance and appeal to this year's bill. And most importantly, the festival is back after a year's hiatus. That alone is reason enough for celebrating.

---
Here's The Star's report. Here's a television station's interpretation of the press conference. Here's another one. KCJazzLark weighs in here.

(Original image of Michael Pagan at Friday's press conference by Plastic Sax.)
Posted by Happy In Bag at 4:38 PM

that line up is weak

When will the Jammin' at the Gem series be released?

I guess you're not a "Sweet Sticky Thing," EC.

Anon- A tentative schedule has been released. KCJazzLark has it: