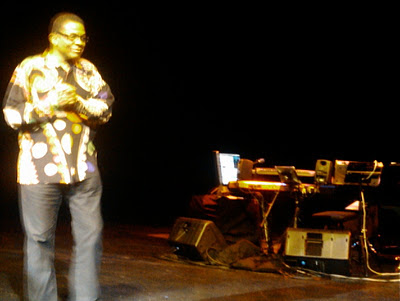 *Herbie Hancock's performance at the Lied Center receives vastly different reviews from The Pitch, The Star and Lucas Homer.

*A critic for an Irish newspaper reports that Bobby Watson combined "flawless virtuosity with emotional intensity" in a recent headlining appearance at a festival in Cork.

*A Pat Metheny concert in Bulgaria is reviewed by a rapturous fan.

*Jazz advocate Merrilee Trost, who spent her formative years in Kansas City, is being celebrated in California.

*From Dan Gailey: KU Jazz Ensemble I (our top student big band) will be performing at the Kauffman Center on Sunday, Nov. 13. Here's…
the press release. A little additional information: We'll be playing the first half of the concert (the Wind Ensemble is the second half). The Gershwin suite that we will be performing was written by John Williams for Shelly Manne's big band in 1965—it's a great piece! Gary Foster (saxophone), Steve Houghton (drums) and Clint Ashlock (trumpet) will be guest soloists with the band. We'll open the concert with Bob Brookmeyer's "Silver Lining", a composition from his great 2006 recording "Spirit Music".

*From a press release: The University of Kansas Jazz Ensemble I will perform Wednesday, November 9, 2011, at 7:30 p.m. at the Lawrence Arts Center, welcoming special guest artist, Bug…. The first half of the concert will feature Bug performing with the KU Jazz Ensemble I, playing works by James Miley. Bug will then perform the second half of the concert. The concert is free and open to the public.

*November's listings have been added to The Kansas City Jazz Calendar.

(Original image of Herbie Hancock by Plastic Sax.)
Posted by Happy In Bag at 7:22 AM

Nice story by Jazz Lark as always
but, the 18th and Vine District is also funded by the government. The Executive Director of the AJM makes a salary WELL (public domain look it up) over six figures also underwritten by the government.

The Rhythm and Ribs Festival was excellent this year but the last several years it was poorly run, disorganized, and it ran late across the board, PR, acts etc.

There should be more consistency and accountability at 18th and Vine. Almost everything starts late and is disorganized.

It is risky to commit an evening or day to attending an 18th and Vine event because most of the time they are non-events. So many times I've attended events that nobody showed up for or new what the heck was going on.

Did you hear the sound at the recent Joe Lovano concert at the GEM. There is no excuse for Esperanza's bass to sound that bad.
Same sound guy. Same bad sound.

Where is the accountability? Government employees stay in their jobs whether they are competent or not.

I'll keep coming because I love jazz but most people would not tolerate that kind of lack of predicatabity.

Maybe Jazzlark should stop complaining about how the white community from johnson county doesn't go to 18th and Vine. He never seems to find fault with the black community on Troost and Prospect for not going there.

What a lame "Tweet o' the Week." KC's jazz community needs to start getting a little cleverer in its tweetage.

I've been pleased with every AJM-affiliated event I've attended in 2011, Nigel.

I selected Lowrey's tweet partly because 1911 Main isn't doing it for themselves. I don't get it.

KC is and always been a racist town. Jazz is about freedom and tearing down walls. If the jazz club is at 18th & Vine, than that's where you'll find me, along with lovers, muggers and thieves.

Happy,
What about the sound of the bass at the Joe Lovano concert? How could you be happy with that?