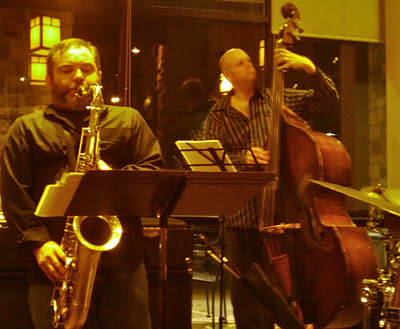 Opportunities to hear live renditions of compositions by Sam Rivers and Larry Young are rare. Hearing them in a coffee shop about 25 miles southwest of Kansas City's historic jazz district is even more unlikely. Yet that's just what transpired Friday at Take Five Coffee + Bar in south Leawood.

A quartet led by saxophonist Rich Wheeler startled a capacity audience of three dozen at Take Five, an increasingly vital venue on the regional jazz scene. Respectful of tradition yet intent on exploring the outer fringes of jazz, Wheeler's quartet exhibits a sensibility similar to the recent work of influential British veteran Dave Holland.

Take Five may be situated in a soul-sapping commercial development far from the center of the city, but between Wheeler's band and the delicious array of beverages served by its friendly staff, the venue was surely one of the hippest places in the region for a couple hours last Friday evening.

(Original image of Rich Wheeler and Bill McKemy by Plastic Sax.)
Posted by Happy In Bag at 2:54 PM

Actually Midtown and 18th and Vine are are "soul sapping".

The burbs are where its at!

That was a great show - I enjoyed both the music and playing - one does not get to hear Rich lead and play in a small group often enough. I really like the sound in Take Five as well, good audience too...

We love Take Five. We missed that show but we are spoiled because it is so close to home. We also like the jam sessions. Let me know next time you go sir.
CD