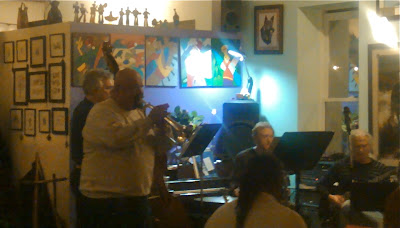 *"Let’s not have another jazz year like 2011," Joe Klopus pleads in a year-in-review column.

*The Marshall Democrat-News offers a profile of Clarence Smith.

*"It's hard to own and operate a business promoting one of the least popular forms of music in our country," T.J. Martley says in a preview of a gig at the Blue Room.

*Will Matthews is interviewed.

*Mambo DeLeon is the subject of a video interview.

*An audio interview with Karrin Allyson was conducted by the pop group Mulberry Lane.

*The author of Outside-Inside-Out solicits the input of his friends in a review of the Owens/Cox Dance Group's most recent collaboration with the People's Liberation Big Band.

*Howard Reich reports that Miguel Zenon will "re-examine" the Charlie Parker With Strings album in Chicago on February 24.

*Tweet o' the Week: paynic- @Toure The j word has oppressive overtones. It was the name for the white caricaturization of Black music.

*Alas, the month of January looks slight at The Kansas City Jazz Calendar.

*From Drew Williams: The Drew Williams/Tim AuBuchon Quartet play music that is loose but accessible. Their compositions draw on musical inspirations as diverse as Ornette Coleman, Paul Motian, Igor Stravinsky, and Wilco... Drew Williams is a saxophonist and a composer originally from Kansas City, Missouri. He is currently pursuing a Masters degree in Jazz Composition from NYU… Saxophonist and composer Tim AuBuchon... is currently Professor of Jazz Studies at Truman State University... The pair performs with Bill McKemy and Matt Leifer on Friday, January 6, at Take Five Coffee Bar, Leawood, Kansas.

(Original image of Customer Quintet performing at Great Day Cafe by Plastic Sax.)
Posted by Happy In Bag at 7:48 AM