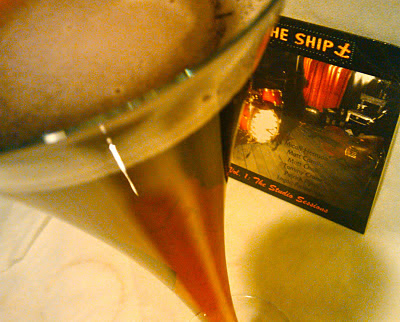 It must be terribly frustrating to be a Kansas City-area jazz bassist not named Bob Bowman, Jeff Harshbarger or Gerald Spaits. The three men invariably secure a disproportionate number of the area's high profile gigs. Each member of the triumvirate deserves his elite standing, but that doesn't mean that the talent pool ends with them. James Albright, Ben Leifer, Bill McKemy and Dominique Sanders are wildly different but uniformly excellent bassists.

And then there's the often overlooked Micah Herman. He's no less impressive than the aforementioned bassists, but to my knowledge he hasn't had a regular widely-touted public gig since he teamed up with Loren Pickford at the Golden Ox for a three-year run that ended in 2009. His new album The Ship, Vol. 1: The Studio Sessions makes a strong case for Herman as a top-tier talent.

While The Ship contains a breadth of styles, Herman generally works from a post-Coltrane perspective. "My Ship", a duet with saxophonist Matt Carrillo, is gorgeous. The contributions of saxophonist Matt Chalk also impress.

Yet it's the presence of Logan Richardson that makes the album essential for listeners not already heavily invested in Kansas City's scene. The brilliant saxophonist appears on five of The Ship's nine tracks. Richardson's innovative soloing on "Ease Back" is the sort of next-level stuff that fans of adventurous jazz dream about. Rather than merely admiring Richardson's improvisations, Herman acts as an electric Charlie Haden to Richardson's stunning Ornette Coleman.

The Ship's quiet issuance in December didn't do it any favors. In spite of its unfortunate timing and complete absence of hype, The Ship is the best album released by a Kansas City jazz artist in 2011.

(Original image by Plastic Sax.)
Posted by Happy In Bag at 8:22 AM

bill,
I repect your opinion of the talented musicians we have in this town. But this time I cannot allow you to overlook STEVE RIGAZZI as a part of the "talent pool" listed in your column. He deserves to be a part of that list! I'm sure you agree that he too is an excellent bassist with his own unique style.

You're right, Katie. I simply forgot to include Steve Rigazzi. I love his playing. It's a poor excuse, but he slipped my mind only because I haven't heard him perform in over six months.

Tyrone Clark is a swingin' bass player too! What a luxury to have so many excellent bass players in this town!

Wow, thanks for the really kind review. We do have a tremendous pool of bass talent, and I often wonder if there should be a "Shirley Jackson" type lottery to thin the herd a little bit... Just kidding. Someone who belongs in the elite bassist conversation is Seth Lee. He's my favorite out of them all, and might be one of the best improvisers in town on any instrument.