Jeff Harshbarger: The Plastic Sax Person of the Year 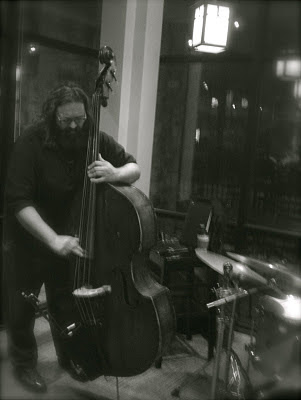 I attempt to clear my calendar when I learn that Jeff Harshbarger is participating in a gig. The contributions he makes during jazz, rock, classical and tango presentations often transform good shows into great ones. Harshbarger's refusal to be limited by categories is just one reason the prominent bassist is Plastic Sax's Person of the Year.

In addition to touring extensively as the newest member of Jacob Fred Jazz Odyssey, Harshbarger can be heard on The Race Riot Suite, my favorite album of 2011.

Harshbarger is a vital component of the People's Liberation Big Band of Greater Kansas City, one of the region's most interesting aggregations. The ensemble plays regularly at the RecordBar, where the "alternative jazz" series curated by Harshbarger is an essential element of the jazz scene. Many of the adventurous local and national acts tapped by Harshbarger might not otherwise have found a hospitable place to perform in Kansas City.

Bill, I am humbled and I am honored. Thanks for all that you do for the music. We have an amazing artistic community in this city, and it wouldn't be the same without your support. Thank you very much.

Jeff also hosts a great jazz radio show Wednesdays at 1 p.m. on KKFI. Makes for a great lunch for this guy.