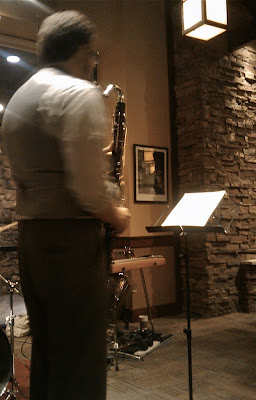 *KCJazzLark is a man with a (business) plan.

*A track from the forthcoming Project H album is streaming here.

*Roy Hargrove will appear at UMKC Jazz Festival on February 3.

*T-shirts, gigs and ideas are on tap at the latest post at the site of the Black House Improvisors' Collective.

*The title of the January 18 edition of KCUR's Central Standard Time is "Kansas City Jazz with musician Mark Lowrey."

*The Sun Session, the new album by Grand Marquis, has been released.

*The Glenn Miller Orchestra is performing at Shawnee Mission West on February 11.

*Tweet o' the Week: americanjazzkc- Count down to Benny Golson in the Blue Room 2.25.12...let us know your favorite Benny Golson tune!

*From Doug Talley: As you probably know, Westport Presbyterian Church suffered fire damage a couple of weeks ago. So our annual Martin Luther King Day concert has been relocated to Community Christian Church, 4601 Main Street Kansas City, MO 64112… As always, the concert will begin at noon on Martin Luther King Day, next Monday, January 16.

*From Central Seminary: Please be our guest at Central Seminary this year for the Sacred Arts Recital Series which began last fall in the Baugh-Marshall Chapel. These complimentary recitals feature some of Kansas City’s finest musicians. The spring series, which will be held on the third Sundays of the month at 4:00 p.m. begins this Sunday, January 15… This Sunday’s recital will feature jazz keyboardists Dr. Michael Pagan, Roger Wilder, and Joe Cartwright for a keyboard “play-off.”

(Original image of Russell Thorpe by Plastic Sax.)
Posted by Happy In Bag at 9:37 AM