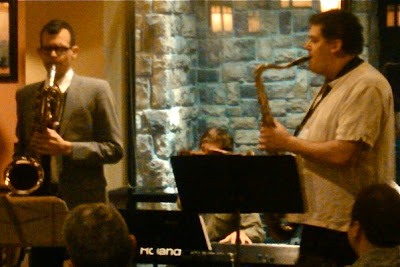 *Plastic Sax is gently chided by KCJazzLark as he deplores the absence of a major jazz festival in Kansas City.

*David Basse is among a handful of jazz-based acts scheduled to perform at Salina's Smoky Hill River Festival in June.

*Comment o' the Week: Bob McWilliams- …the contrast between the very buttoned-down Basile and the over the top energy and emotion from Scheps was rather stark…

*From Michael Pagan: Kansas City Youth Jazz organizers have set their annual Masters of jazz fundraiser for 6:30 PM on Sunday, April 22nd 2012 at the Madrid Theater... The event will include dinner and music provided by the Abel Ramirez big band and KCYJ groups for listening and dancing. Tickets cost $75 per person. A Patrons’ Party/reception will take place at 6:00 PM for donations of $150 or more. Dance/cash bar only tickets will be available for $20.

(Original image of Frank Basile and Rob Scheps at Take Five Coffee + Bar by Plastic Sax.)
Posted by Happy In Bag at 11:20 AM