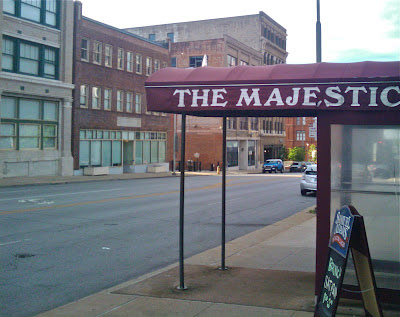 "We heard you had some good steaks here," a jovial patron told a waiter as he and a large party were being seated Sunday at The Majestic.

The restaurant's emphasis on fine dining is precisely why I hadn't patronized the downtown establishment in months.  Sadly, I'm not in the market for a dry-aged porterhouse.  Sunday's visit proved that I can (not) have my steak and eat it too.  With the closure of Jardine's at end of 2011, The Majestic moved up a notch in the hierarchy of Kansas City's jazz establishments.  Many would suggest that it trails only the Blue Room as the most important jazz venue in town.

Others have accurately observed that The Majestic's basement resembles a speakeasy.  The candlelit room's excellent sound is less frequently noted. It's a decent spot for jazz.  And should the tables fill up- as they almost did at 7:30 p.m. on Sunday- there are six stools at the bar for listeners who don't want to invest in dinner.

Sunday found three of Kansas City's smartest and most creative musicians- Mark Lowrey, Sam Wisman and Ben Leifer- playing top-flight renditions of jazz standards.  While all three bearded men regularly play in other contexts, each obviously relished the opportunity to perform with like-minded jazz-based musicians.  Although it took liberties with "Body and Soul," the trio played classic material by the likes of Bill Evans and Charles Mingus in relatively straightforward fashion.

The retrenchment of Kansas City's jazz venues saddens me.  Yet the prospect of spending a few summer evenings listening to jazz in the basement at 931 Broadway alleviates some of my sorrow.

(Original image by Plastic Sax.)
Posted by Happy In Bag at 11:38 AM