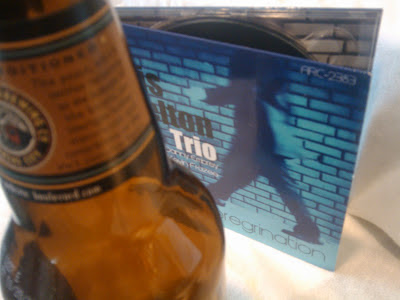 Many of the most meaningful moments of my jazz initiation occurred while I sipped illicit cocktails at Milton's on Main Street when I was an insubordinate teen. The jazz club's bartender introduced me to the music of Shirley Scott, Big John Patton and Jimmy McGriff by means of a turntable that was prominently positioned alongside the bottles behind the bar.

The experience provided me with invaluable context. The jazz organ is meant to be heard in dark, smoky rooms filled with booze-addled revelers.

I found myself in a setting completely antithetical to Milton's during lunch hour last Tuesday. Under harsh lighting that illuminated neatly arranged rows of chairs, I was one of about 100 people who heard Chris Hazelton's band revive the classic organ trio sound at the Carlsen Center Recital Hall at Johnson County Community College.

Hazelton, guitarist Danny Embrey and drummer Kevin Frazee were on fire. Concentrating on material from the very fine new album Peregrination, the trio burned through an hour of greasy, sin-soaked organ jazz. Hazelton's impeccable work on his Hammond B-3 was thick and fearsome. Frazee played with an innate funkiness. Embrey's presence on the gig and on Peregrination, however, make the project truly memorable. He's a phenomenal musician.

Had it transpired in a late night dive, the performance would almost certainly have been one of my favorite gigs of 2012. Even in the unlikely setting, it was one of the most rewarding lunch hours I've enjoyed in ages.

(Original image by Plastic Sax.)
Posted by Happy In Bag at 5:35 PM

Word. The presence of Embrey moves this OJT to the head of the class in KC. Chris wrote some really interesting/fun tunes for the CD - recommended!