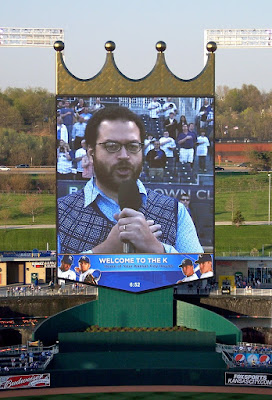 *Longtime Kansas City jazz favorite Pete Eye has died. Here's his obituary. This newly uploaded video of Eye at a 1986 wedding reception will have viewers smiling through their tears.

*From the Jacob Fred Jazz Odyssey: (W)e are happy to welcome Jeff Harshbarger as our new double bassist. Residing in Kansas City, Harshbarger is a prolific composer and bandleader in his own right. Plastic Sax interviewed Brian Haas of JFJO ten months ago. (Initial tip via Steve Paul's Twitter feed.)

*Charles Perkins, perhaps the finest living Kansas City jazz artist who's managed to hide his formidable talent from the internet, can finally be seen on video.

*KCJazzLark continues to entertain and enlighten. He offers a review and photos of Junior Mance's gig at the Blue Room. In a separate post he toasts the new release by Mike Metheny and roasts the feeble marketing efforts of a couple jazz venues.

*I've seen it with my own eyes. The Kansas City Strip trolley stops at 18th & Vine on Fridays and Saturdays. A "daily pass" costs $15.

*"I see people that are hungry waiting for their mail/Hoping that their loved one is not in jail!" Sellie Truitt's new video for "Save Our Saturdays" has to be seen and heard to be believed.

*Dean Minderman, the man behind the excellent St. Louis Jazz Notes, is displeased by the 2010-2011 jazz season at Sheldon Hall. Don't be surprised if some of the same acts appear on the Folly Theater's next jazz series.

*From Brad Cox: On May 1 (International Workers' Day), 2010, The People’s Liberation Big Band of Greater Kansas City will perform the ensemble's original score to Sergei Eisenstein’s classic 1925 silent film “The Battleship Potemkin.” Along with a complete screening of "Battleship Potemkin," the People's Liberation Big Band will also accompany two short films as a prelude to the performance. Composers and arrangers contributing to the project include P. Alonzo Conway, Brad Cox, Jeff Harshbarger, and Jeffrey Ruckman. The People’s Liberation Big Band’s score, which contains newly composed material, free improvisation, and arrangements of Shostakovich melodies, was premiered last year on May 1st, and was named as one of the best music events of the year by Bill Brownlee, special contributor to the Kansas City Star. The performance will take place at the Paul Mesner Puppet Studio (1006 Linwood Blvd, Kansas City, MO 64109) at 8:00 p.m. Ticket price is $15, $10 for students.

(Original image of Nathan Granner performing "The Star-Spangled Banner" at the Royals game on April 9 by Plastic Sax.)
Posted by Happy In Bag at 11:33 AM

Forgive me if you've already linked to this, but I wanted to let your readers know that Orrin Evans was on The Jazz Session recently, and much of the conversation was about KC's Bobby Watson. Orrin's new record is a tribute to Bobby on many levels, and I thought Plastic Sax fans would enjoy the conversation. You can listen here:

Thanks for the link, Jason. I'll confess to having accidentally overlooked it when it crossed my desk. Nice work.