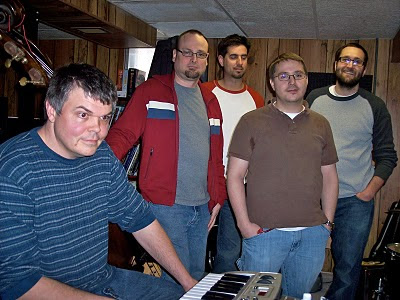 Maybe I've been making everything too complicated. Instead of worrying about what qualifies as jazz, perhaps I should embrace the notion that any act booked at a jazz club is, by definition, a jazz act. Mixed Method perform at Jardine's on Saturday, April 10. An email interview I conducted with the quintet follows.

Plastic Sax: Your music seems like equal parts jazz, electronica and progressive rock. Is that a fair characterization? How would you describe your sound?

Mike Malaker: That's a good description, but you might throw in dub, funk and Afro-Caribbean into the mix as well. I'm sure there are others. We are all about combining our influences into new forms.

Ryan Nilson: Yes that description sounds pretty fair. Our sound is really just a mix of what we listen to and like. Sometimes this eclectic influence works and sometimes it does not. There are times when we all are like "yeah, this is awesome" and other times we are thinking "what are we doing?"

J Witzgall: Well, there are a slew of European bands, Jaga Jazzist, Sayag Jazz Machine and others that mix electronica with Jazz and rock. We have a similar sound. In the beginning, we went for a little harder electronica sound. Not having a drummer and using mostly breakbeats pushed us closer in that direction. Now with a drummer, we are able to sound much more like our other influences, spilling over into John Scofield-ish funk and prog rock/math rock stuff among others.

PS: I detect a King Crimson influence in your sound. Am I crazy?

MM: That's interesting. They are one of my early influences, though I never consciously thought of them as part of this band's sound.

JW: When I was a kid, in the Washington D.C. suburbs, Robert Fripp had just started the Guitar Craft workshops in an old school/monastery for the Gurdjieff philosophy that Fripp was into at the time, so we went out to see the first Crafty Guitarists concert, and we went and talked to Fripp, and one of my friends who had come with me thought it was kind of stiff, and told me he was going to advise Fripp to buy Elvis' Sun Sessions to get some inspiration to loosen up, but at the last minute, he chickened out. What's funny is that a few months ago I was reading a book by a Guitar Craft student, and I come across a passage where Fripp is listing his favorite albums and his #1 favorite album turns out to be Elvis' Sun Sessions! Anyway, we don't deliberately try to sound like King Crimson, but it probably creeps into our sound without us being aware of it.

PS: What are your musical influences? And what's the background of the band's members?

RN: Major group influences are: Cinematic Orchestra, Erik Truffaz Quartet, Jaga Jazzist, Jojo Mayer’s The Nerve, and Sayag Jazz Machine. We all have various levels of jazz and classical training and education. Besides Todd (the drummer) none of us are really on the Jazz scene in KC.

MM: I'm primarily a self-taught guitar player. My earliest influences were progressive rock, and then I gravitated to post-punk sounds such as Television, Gang of Four and Wire. I loved the DIY aesthetic and using music as a means of personal expression instead of pursuing virtuosity. However, about 12 years ago, I realized that relying solely on my ear and intuition wasn't getting me where I wanted to go musically. I decided to pursue formal training and studied jazz guitar with Frank Rumoro and later with David Bloom, both excellent instructors from Chicago.

JW: All of us are or were involved with jazz to some degree. I'm into really out/avant/confrontational stuff, Ryan is into groovy hypnotic electronica - mostly drumnbass, Todd is into math-rock and technically challenging stuff. Nick is into that early Miles On the Corner kind of stuff.

PS: Material like "Unisound" is cinematic. Do you think of your music in a visual sense?

RN: Yes, we do want a cinematic quality to our music. We want it to give off a vibe or feeling much of the way a movie sound track sets the stage for what is going on in the film.

MM: For me, I'm really just thinking about the music without any external references. However, I believe music is most effective when it can invoke images in the listener.

JW: We are sort of heading in that direction. Most people when they are to the point of listening to music as organized sound, without any preconceptions of who's performing it, they'll draw visual images from it; they'll relate to it visually.

PS: A note at your site suggests that Mixed Method took time off to "reinvent themselves." What's that mean? And why did you feel you needed to change?

JW: Well, honestly we just got bored with what we were doing, and we were kind of stuck in the cycle of rehearse/perform/rehearse and we didn't really have time to develop or write new material.

RN: Everything we had done up to the EP was based on tracks of electronic beats we created and that the band played over. That method worked very well for us but it was a really rigid way to make music. We wanted to look at adding a live drummer and that meant redesigning the roles in the group and the way we played. We had to write all new material and figure out how we work as a group with a drummer. I think we are still trying to figure this out in many ways. Right now our music is even more diverse than before. It will be interesting to see where things head as the band continues to work together.

MM: Having Todd in the band has increased the energy level enormously. We still have electronics as a large component of our sound, but having a live drummer gives us so much more flexibility then we could ever get with programmed tracks.

PS: I love conventional acoustic jazz. It's my belief, however, that jazz must incorporate outside influences and new sonic textures in order to avoid becoming a Dixieland-style museum piece. Do you agree? And if so, do you view "saving jazz" as part of your mission?

RN: We all really dig traditional jazz too. There are so many amazing jazz musicians in KC playing at a very high level of skill and sophistication. We are not saving jazz, we don’t even claim to be jazz in a traditional way. If you want to see amazing jazz chops or mind-blowing solos you are not going to get that with us. The fact is that when play instrumental music with our instrumentation you get a jazz label and we are ok with that.

MM: We all love jazz, but I think of Mixed Method as a group that plays modern instrumental music with jazz influences. This isn't really a jazz project per se.

JW: I think that Jazz is already a museum piece. It doesn't need to grow to survive. It's like opera.

PS: Is Kansas City an accommodating base for an act like Mixed Method?

RN: Yes, KC has been pretty good to us.

JW: Apparently - we seem to get shows.

MM: So far, so good. I've only been in KC for a little over 5 years. I moved here from Chicago, which has a phenomenal music scene. However, I really like the vibe of this town. There is a lot less attitude here, and the music scene is really diverse with many outstanding players.

PS: Would you rather play for an audience of 500 people in a dance club or for 100 beard-scratching jazz fans? What is Mixed Method's ideal audience?

JW: What's funny is we've done both now. But the ideal audience is the one that gets us. People in both environments seem to get it.

RN: Our ideal audience is folks who take our music for what it is, and don’t try to corner us into a genre.

PS: Jardine's lists your April 10 show as "Underground Sounds." Do you agree with that assessment?

RN: Yeah, I guess. We are playing the show with Hominid which is Hunter Long’s solo electronica act. We are happy Jardine’s is giving us a chance to play.

MM: This will be our second show at Jardine's. It is really encouraging that Jardine's is hosting diverse acts such as ours. We are grateful to be able to play at such a prominent venue.

PS: Suppose a sixty-year-old Ida McBeth fan decides to stick around after her early show at Jardine's on April 10. What will that person make of Mixed Method?

RN: I have asked myself the same question.

MM: That all depends on what other sounds they like. Purists will probably not get our thing, but that's how it goes.

(Original image by Plastic Sax.)
Posted by Happy In Bag at 9:03 AM

good interview, hap. i'll have to check them out on my home computer where i don't have corporate surf control blocking the links! - mike t.