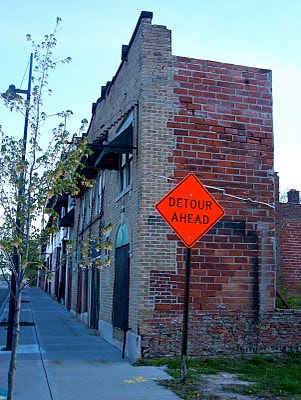 *The Pitch reports that the KCUR radio show once broadcast from the Mutual Musicians Foundation has relocated to the downtown Marriott. The weekly program's new name is 12th Street Jump.

*Thanks to Jason Crane's recent comment at Plastic Sax, we learned that much of Orrin Evans' new album Faith In Action serves as a tribute to the compositions of Bobby Watson. Evans talks about his relationship with Watson in a The Jazz Session podcast.

*Guitarist Will Matthews was featured on KCUR's KC Currents. Download the show here.

*"I've always felt a big part of my job is to irritate those people," Pat Metheny says of jazz purists in a new 8-minute feature on NPR's Weekend Edition. "When I'm not doing that, I feel I'm not doing my job." Listen here.

*"Fits and starts, plans, failed plans, announcements, withdrawn announcements," writes KCJazzLark. He continues the story of the painful path that led to the creation of the American Jazz Museum in parts four and five of his invaluable history.

*Dan White, the photographer behind the “The Fine Art of Jazz" exhibit at the Central Library, is profiled by Rick Hellman. UMKC's newspaper also interviewed White.

*Steve Paul reviews the food at the new version of The Majestic. I keep hoping they will eventually serve up a monthly jazz calendar. (I realize it's a completely unreasonable request...)

*One of Norah Jones' drummers and ex-Kansas Citian Mike Dillon were in Ani DiFranco's band when she played the Beaumont last week. The Star sent a jerk to review the show.

*Sue Vicory reports that acclaimed pianist Billy Stritch, a star in his own right, will accompany Marilyn Maye at the May 6 premiere of Kansas City Jazz & Blues: Past, Present & Future at the Gem Theater.

*Here's video documenting one of Kansas City bassist Jeff Harshbarger's first official performances as a member of Jacob Fred Jazz Odyssey. It was filmed at Starship Records in Tulsa on April 17.

*The Star provides a review of the Clayton Brothers recent concert at the Gem Theater.

*Take a look at the flier for the May 2 KC Youth Jazz fundraiser at the Madrid Theater. Here's a press release about the event.

*A North Carolina newspaper conducted a rather uninspired interview with Karrin Allyson.

*The sad news that the 2009 Rhythm & Ribs Festival had been canceled hit a year ago this week. I'm eagerly awaiting news about the status of the 2010 event. Until then, Denver offers a solid backup plan. A June festival in that city has a strong Kansas City flavor. Bobby Watson and Karrin Allyson are among the headliners at June's JazzFest Denver.

*Johnson County Community College has unveiled its performing arts series for 2010-11. Here are the concerts of particular interest to jazz fans:

*The Lied Center has announced its 2010-11 season. Here are the jazz-related events:

*Found at Facebook: What happens when you combine one of the most talented jazz groups in the country with some the most innovative student composers in the midwest? The Diverse Composition Project seeks to find out... This First Friday event will feature a concert by Kansas City-based jazz quintet Diverse performing a mixed set of their own original works and those of UMKC student composers. (May 7 at Fish Tank Theater.)

*From Tim Whitmer: 9th Annual Plaza Rotary Jazz Cabaret, April 25, Gem Theater: Led by Master of Ceremonies Tim Whitmer, the 2010 Cabaret will be a Jazz Extravaganza featuring the legendary Wild Women of Kansas City featuring Myra Taylor, Millie Edwards,Geneva Price and Lori Tucker and the one and only Wild Man, Bill Maness. Tim Whitmer and the Jazz Cabaret All Stars will open. Included will be James Albright, Jurgen Welge, Jim Mair and Stan Kessler as well as Whitmer on the Steinway piano.

*From Candace Evans' publicist: Candace Evans will be returning for her 4th engagement at the beautiful Lodge of Four Seasons resort at the Lake of the Ozarks on Memorial Day weekend, and will be performing every Thursday, Friday and Saturday evening throughout the season. Also, Candace will be performing again for this year's Dream Factory benefit at the Ritz-Charles Hotel in Overland Park KS on Friday April 30.

(Original image by Plastic Sax.)
Posted by Happy In Bag at 8:14 AM

okay PS... help us out here with the Podcast - how do you open a .ashx on a Windows PC?

Word on the street is that The Rhythm and Ribs Festival may be a one day event this year on Saturday September 11.

Interesting, the same day as the Prairie Village Jazz Festival.

Google Prairie Village Jazz Festival, pick up the latest JAM magazine or read a Plastic Sax announcement from a couple of months ago.

Anon 734- Are you having trouble with the Orrin Evans podcast or with the Will Matthews podcast? Let me know and I'll take a look.

A one-day R&R fest, Anon 444, would be infinitely better than no fest at all.

I just added a link to the Prairie Village Jazz Festival in the column to the right. No artists have been announced yet.

Yes, but as usual the Jazz District with its city line item, schedules their events over top of others as if to say, "if it does not emanate from the jazz district, it's not valid or worthy."