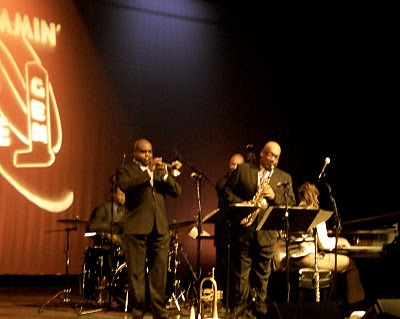 *Prior to Christian McBride's concert last Saturday, Doug Tatum announced that Sachal Vasandani and Dave Brubeck have been booked as part of the Folly's 2010-11 jazz series.

*"I wanted to see an area thriving with people, shops and things to do," a blogger writes about a visit to the Jazz District, "(A)nd what I saw were a lot of businesses that didn’t make it, closed up storefronts, lifeless streets, and the façade of a neighborhood that just doesn’t exist anymore."

*Milton Morris is evoked by KCJazzLark.

*Sue Vicory provides additional details about her May 6 film premiere at the Gem Theater.

*Tony Botello posted several jazz-related items during the last week. He catches up on the controversy at the Mutual Musicians Foundation. He opined on the name and venue change of KCUR's 12th Street Jump. He also checked in with Jazzbo and noted that a progressive rock band has taken up residency at Jardine's on Monday nights. Finally, the prolific blogger was on hand for Reach's live album recording with jazz/jam band Mouth at the Record Bar.

*The Star reviewed the Christian McBride concert at the Folly Theater. Here's fan footage from the upper balcony.

*"To hell with practicality; if it’s something sweet to watch, it’s worth the challenge of creating and executing." A reviewer in San Diego is astounded by Pat Metheny's Orchestrion.

*It looks as if he and Fanny have been at it since last August, but I just discovered Alaadeen's blog.

*Megan Birdsall provides a new installment of her tour vlog. I've made fun of her video blogging, but seriously, similar efforts should be part of every performing artist's weekly routine.

*In a typically excellent post, St. Louis Jazz Notes heralds the May 1 performance of the Count Basie Orchestra in his town.

*Matt Chalk and Tim Whitmer lead groups at a May 7 charitable benefit at the American Jazz Museum.

*A full press release detailing the weekend's activities at the American Jazz Museum concludes this post, but those aren't the only significant jazz events in town this week. Here are a few additional listings:

*Via the American Jazz Museum:

“Inspirations of the Duke”

“The Genius of Duke Ellington: Goin’ to Graduate School – A Players Perspective”

(Original image of the Clayton Brothers by Plastic Sax.)
Posted by Happy In Bag at 1:25 PM

I can't help but comment on unintentional irony of the blogger who complained that 18th and Vine was lifeless in the same post in which she admitted it was 16 years since she'd been down there ...