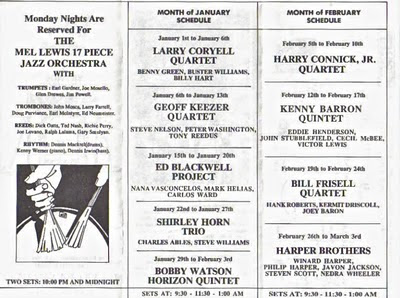 I came across an old calendar for the Village Vanguard while doing some spring cleaning. I'd tucked it inside a travel guide I'd used on my first business trip to New York in 1991.

I'd been giddy about making a pilgrimage to the jazz mecca. I was disappointed. Its storied history aside, the Vanguard is just another room. I recall thinking that Kansas City had several jazz clubs that were superior to the Vanguard. They're gone now.

Does this old flier indicate that "things ain't what they used to be" or is it a case of "the more things change, the more they stay the same"? It's a bit of both.

Ed Blackwell died the following year. Shirley Horn died in 2005. Otherwise, the bookings could pass for 2010. Mel Lewis passed in 1990 but his orchestra still plays the club on Mondays. Bill Frisell even returns to the Vanguard next month.

Kansas City's Bobby Watson is, of course, still very much with us. The only sign that jazz was less unpopular nineteen years ago is the Blue Note label's advertisement for Watson's latest album. The cassette was only $6.99! 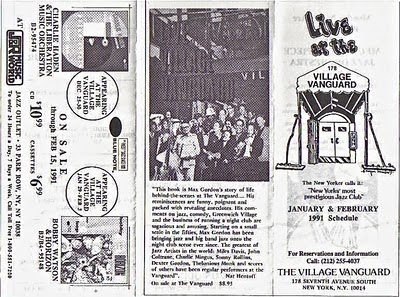 It was fun to see this.

I don't think Harry Connick Jr. plays clubs too much any more, so perhaps that's one more difference between the Vanguard in 1991 and 2010. Though I suppose if he were to play a club gig, the Vanguard might still be on the short list to host it...

I considered that, Dean, but I reckoned that Connick would, in fact, still play the Vanguard to promote a mainstream jazz release.