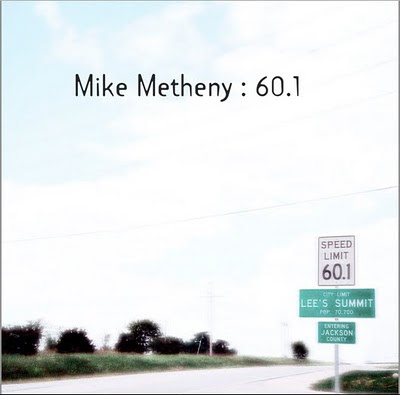 I may never forgive Mike Metheny for making my life a living hell.

The opening track of 60.1, his new album, may be the most infuriating earworm I've ever encountered. It's as if the tormented ghost of Raymond Scott had assumed control of the USC Marching Trojans.

The deliberately annoying march has taken up unwelcome residency in my cranium for the past two weeks. Metheny named the piece "Dubious Melody," but "Crime Against Humanity" would be be a more appropriate title.

It takes enormous talent to be so maliciously awful. At this late date, jazz fans could be forgiven for failing to remember that Metheny was once a major label recording artist and had served as a faculty member at Boston's Berklee College of Music. While Metheny has returned to Missouri and jazz's fortunes have waned, Metheny's prodigious musical gifts have not diminished.

The evil "Dubious Melody" aside, Metheny uses his genius for good on 60.1.

Propelled by drummer Brandon Draper, the title track is absolutely savage. It demonstrates that Metheny is still capable of making a righteous racket that can challenge the testosterone levels of even the most manly fans of Medeski Martin & Wood and The Bad Plus.

"60.1" and a couple additional noisy numbers make the album's relatively conventional mainstream tracks seem tame. It would be a shame, however, to overlook Metheny's gorgeous playing on the Bill Evans ballad "Laurie" and the fine Bob Bowman solo on "C.C. & Water." Other Kansas City-based artists on the album include pianists Paul Smith and Roger Wilder and guitarist Danny Embrey.

Metheny demurred when I asked for permission to post a track. All ten selections are different, he suggested, and hearing only one piece would be inherently misleading. There's some truth to that. Even so, the entirety of 60.1 s characterized by Metheny's artistic restlessness, adventurous spirit and stupendous musicality.

Just don't listen to that first track.
Posted by Happy In Bag at 12:05 PM

Maybe this will be more to your liking:

Many thanks, Plastic Sax. I am cool with every word and am flattered that you would find some space on your excellent site for this new release.

Regarding the admittedly insidious first track... About all I can say in my defense is that I come from the same gene pool that gave the world "Forward March." Even my evocative "Greatest Love of All" pales in comparison to that masterpiece. (Although I consider myself a much better clarinet player than Lyle Mays ever was a trumpet player.) I guess with so much Sturm und Drang in the world, there remains a strange genetic compulsion (misguided as it may be) to bring a few more pie-in-the-face moments to mankind, may Soupy Sales rest in peace.

All seriousness aside (as Steve Allen used to say), your reaction to the Medley will surely be the rule rather than the exception. And I'm totally fine with that. It was a risky call on my part and I'm gonna take some heat for it. But like I said in the liner notes, I wanted to do one more CD before they become obsolete and... why not shake it up a little this time? The previous eight each started with something more conventional -- and certainly more pleasing to the ear (well, maybe not "Straight Life") -- and before my teeth start to fall out I felt the need to be naughty one more time.

Plus, I may get a good Hal Leonard audition demo out of it! Pat's music is becoming well known in the drum corp world and I could use the bread from a lucrative publishing deal. Then, if all the stars line up just right, maybe my dubious arrangement will be part of a frosty fall evening where the captain of the football team gets a little from the homecoming queen after the big game and I will have done my small part to make the world a better place.

Keep up the great work. I'm a big fan.