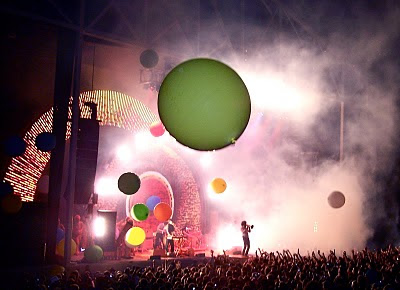 I thought about jazz during Friday's concert by The Flaming Lips in Bonner Springs, Kansas.

It didn't cross my mind as confetti rained on me. I didn't think about it as the band's vocalist scurried over my head in an inflatable hamster ball. And I forgot about it when images of naked women were projected on the screen behind the stage.

But when the Oklahomans ponderously slogged through Pink Floyd-style jams I wondered why so few jazz artists incorporate crowd-pleasing theatrical elements into their live presentations. I love the Flaming Lips but I'll be the first to admit that they're not exactly the greatest band in the world. That didn't stop almost 5,000 people from paying $35 to $40 to partake of the band's generous spirit and spectacular stage show.

Look at the picture I took Friday. Then look at the image I captured of Lionel Loueke's appearance at the Blue Room last November. Which show looks like more fun?

There's a catch. The fifty people at Loueke's performance heard better music. Loueke's refreshing fusion of indigenous African music, pop and jazz is instantly accessible. I suppose it's a little more esoteric than the bombast of the Flaming Lips but I refuse to believe that one out of twenty Flaming Lips fans wouldn't be completely down with Loueke's slightly psychedelic sound if they only knew of him. I'm simply not willing to accept the tired adage that jazz is too sophisticated for the average person.

Just like jazz musicians, the Flaming Lips are largely ignored by radio and music television. What gives? It's no mystery- the Flaming Lips put on a show. Two acts with Kansas City connections are also addressing the expectations of today's audiences.

Dave Stephens has created what he calls a "jazz circus." Watch this representative video. A lot of uptight jazz snobs (I'm one of them) roll their eyes at Stephens' antics, but his routine has made him one of this town's most successful entertainers.

Another Kansas City act with an emphasis on presentation is Quixotic. As seen in this video, Quixotic's Cirque du Soleil sensibility is astounding.

Quixotic, Dave Stephens and yes, even the Flaming Lips, represent the competition for jazz musicians. I'm not suggesting that exotic dancers and freaky videos are the solution to jazz's dwindling popularity. But business as usual clearly isn't working.

Projecting Sam Peckinpah films behind 81-year-old pianist Hank Jones obviously wouldn't work. But what does a young act have to lose? I believe there's an audience eager to embrace jazz musicians who are willing to acknowledge that it's 2010. 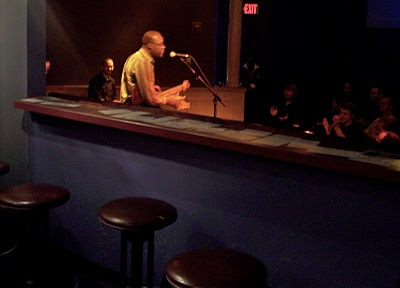 (Original images by Plastic Sax.)
Posted by Happy In Bag at 10:09 AM

you have a point happy, but only to a degree. lips can do that kind of show because they're also on a huge stage and have the financial wherewithal for all the gear a show like that takes. i daresay jazz acts would have a hard time dressing up their show as easily.

that isn't to say they couldn't do "something." but it you won't see them hovering above the stage either. - mike t.

On the other hand, Mike T., a smaller stage requires less elaborate effects.

Projecting images from a laptop is easy.

The dancers I see performing with local rock acts are fans of the bands.

Showmanship can take on many different forms and it is just one facet of an effective performance. If it fits the artists message to use huge stage effects then that is what he/she needs to do to make their show most effective. The important thing is that no matter how extreme or not the methods are, that they mean something and there is an intent behind them that makes them a part of the show besides merely pandering to a crowd to sell more tickets. That is artistic irresponsibility and though it may work more times than not, it only serves the selfish desires of that person to make more money or gain more fame, it does not leave a lasting effect on the audience. So while it may temporarily bring butts to the seats, it does not keep them there for very long before a person realizes how dishonest what they are experiencing is and looks for the next best thing (which in some places may just mean turning to the person next to them for a lively conversation about their favorite type of cheese during the middle of a song). You can usually tell how genuine an artist is by the lasting effect he/she leaves on society, because art is a part of the people within that society.

Basically what I am saying to artists, myself included, who wonder about this same question is that if what you are doing is not working, then what you are doing needs to be refined, it is not the fault of the "ignorant audience". I personally do not buy into the argument that jazz is too sophisticated for most people and that is why it is not popular. There are as many different ways of drawing people to a show and keeping their attention the whole time and leaving a lasting inspiration on them as there are people who have ever lived, are currently living, and will ever live. Part of being a musician is to find what works for you, this has to in some part consider your audience.

Some smart guy said once that insanity was doing the same thing over and over again and expecting different results. By this definition of the word, a musician who refuses to change what he/she does, dismissing the fact that they have no audience, and still complains about it is insane.

That's all I really had to say. Thanks for the thought provoking article, sorry for being long winded.

Interesting post, Bill. I've thought for a long time that jazz musicians could be doing much more in terms of presentation to help draw people in, without necessarily compromising the content of their music.

Light shows, visual effects, costumes and the like are all fun to see, but sometimes even simple things can make a difference.

A random example: When I saw Gordon Goodwin's Big Phat Band perform, at the beginning of their set, the rhythm section started a funky vamp, Goodwin took the mic and introduced each band member as they ran onto the stage, like the members of a starting lineup taking the field at a football game. The student musicians in the audience ate it up, and hung on Goodwin's every word of subsequent between-song commentary, which was down-to-earth & funny while also giving insight into the various arrangements. No props or special effects at all, just some well thought-out stage business.

While I find their music a bit generic, Goodwin & the Big Phat Band deserve props for figuring out what their audience wants & putting on an entertaining show that communicates with people.

What I thought of when I read this post was Sun Ra, and his local adherents, BCR. They knew how to mix fun with jazz.

Last year st a KCJO concert the band mebers were introduced individually before hand ala Gordon Gordwin's Big Band and with an anecdote about each player. Maybe we'll see that Friday night at the Folly.

Plastic Sax - I love your blog and the Flaming Lips. I understand the sentiment of your post and the comments here, but all this just doesn't feel right to me. Jazz is not dead or dying (jazz was eulogized back in the 50's by Downbeat magazine . . . does that make me a zombie?) and musicians shouldn't feel the need to use lasers and giant balloons just to put butts in the seats. -Sam

well.. along the same lines come out and see what I have in store for people. Its not as exciting as the lips, but it does make for interesting watching as well as listening.

The Interpreter Sessions at the Czar Bar, Sat May 1 form 7-9. A place for musicians to take their mind off things.

I'll have to take your comment that Lionel Loueke is "better music" than the Flaming Lips as a highly debatable statement of opinion. Different audiences, different kinds of music.

But like Rickn from PV, when I was at the Flaming Lips show, I thought of Sun Ra, as well as current manifestations of the Arkestra.

But more importantly, I thought of local musician Mark Southerland and his various projects: Wee Snuff, Snuff Jazz, and The Urban Noise Camp, not to mention the People's Liberation Big Band. These performances demonstrate excellent improvised jazz, as well as creative and visually exciting stage sets and costumes. The kind of overt weirdness in these shows might be attractive to Flaming Lips fans who may not already be familiar with his music.

Thanks for posting your thought-provoking comments here.

Well put, Ben. I recognize that my argument is crass. Witnessing the absence of "meat in the seats" week after week and year after year does that to a jazz fan. Artists must to be true to themselves. Yet, as you suggest, sometimes guys need to recognize what's happening around them.

It's true, Dean. That stuff works when it doesn't feel forced.

Good call, Rick. Sun Ra, via Dwight Frizzell, was one of my gateways into jazz.

I hope you're attending tonight's KCJO concert, Anon 637. I'm going to the "other" big show.

Thanks for the tip, Phonologotron.

You're right, Pete. That was a silly comment. Sometimes I can't help myself. I agree completely about Mark and the PLBB.

Thanks one and all for bothering to comment. I truly appreciate your responses.