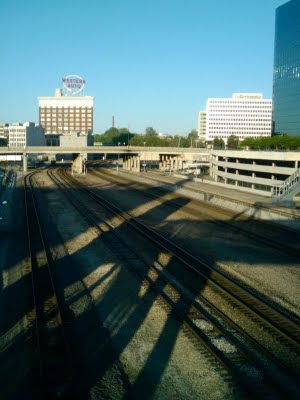 *Pat Metheny's new solo acoustic guitar album, What's It All About, will be released June 14. From the artist's site: "What's It All About" features classic tunes from songwriters like Paul Simon, Lennon & McCartney, Burt Bacharach, and Henry Mancini. Pat describes it like this: "I wanted to record some of the music that was on my radar before I ever wrote a note of my own, or in a few cases, even before I played an instrument.

*Mark Southerland is one of the curators of America Now and Here, Kansas City. A number of area jazz musicians are participating in the prestigious project. Alaturka, the People's Liberation Big Band and Bobby Watson are among the artists selected.

*Tales of jazz intrigue just keep on coming from KCJazzLark.

*A proposed restoration of the Boone Theater on 18th Street is questioned in an editorial in The Star.

*Tweet o' the Week: 12THSTREETPETE: Saturday was fantastic! Gotta thank Karrin Allyson for stopping by. We're live on 1st Saturdays for a few months, then back to weekly. L8r!

(Original image by Plastic Sax.)
Posted by Happy In Bag at 8:45 AM

I sure wish Jazz Lark would name names. Its okay to do that.