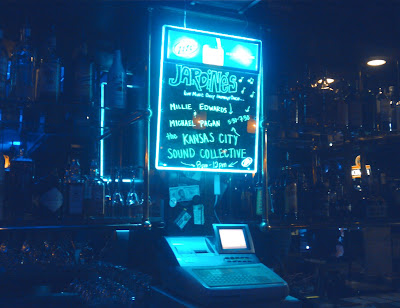 Although it was billed as the band's debut, Thursday's gig at Jardine's wasn't the first time The Kansas City Sound Collective played together in public. The group of young jazz musicians has met up several times for informal jam sessions at the Mutual Musicians Foundation.

The 45 minutes of the first set I caught Thursday didn't offer many surprises, but everything I heard was smart, sophisticated and expertly played. The band's approach was not unlike a mid-'60s date for Blue Note, with saxophonist Steve Lambert assuming the role of Wayne Shorter and trumpeter Hermon Mehari playing the part of Lee Morgan.

A number of notable jazz musicians were among audience of about 50. I sat near drummer Ryan Lee and couldn't help noticing his intent study of the significantly less rambunctious style of his counterpart Brad Williams. Pianist Andrew Ouellette and bassist Dominique Sanders rounded out the group. The five guys on stage had a cumulative age of not much more than 100.

The Kansas City Sound Collective operates under an awkward moniker and its approach is unapologetically conservative. Everything else about the band, however, is positively sublime.

(Original image by Plastic Sax.)
Posted by Happy In Bag at 5:57 PM