On the Corner: Notes on Thursday's Tribute to Miles Davis at Crosstown Station 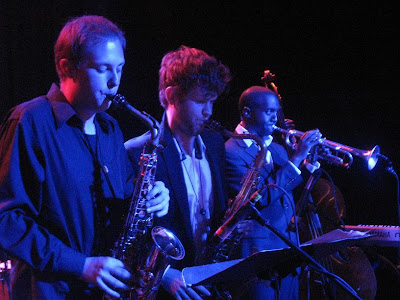 Outlandish ideas involuntarily bum rushed their way into my oversized noggin during last week's tribute to Miles Davis.
After I plopped myself down in the first row of folding chairs at Crosstown Station (about 125 people sat or stood behind me), I became completely immersed in what looked like a theatrical production. As a variation of the Kansas City Sound Collective (I reviewed its May 12 performance here) reverently performed familiar material associated with Miles Davis, I composed dialogue for nonexistent actors to recite between each selection.
With the addition of an acting component, I could easily see these excellent musicians performing the same material in a traveling theatrical production about the life and music of Miles Davis. It was that good. The only downside? Intermission didn't come until 11:30 p.m. I couldn't stick around for the electric set.

(Image of Matt Chalk, Andrew McGhie and Hermon Mehari courtesy of Michael Byars.)
Posted by Happy In Bag at 12:46 PM

Any event featuring the three guys pictured is a 100% guarantee of great music.