Jazz Is Up to Date 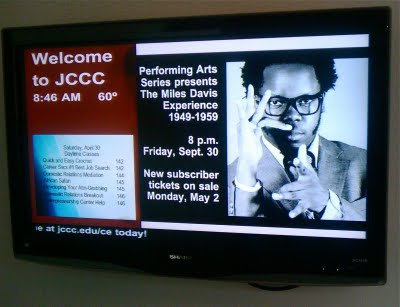 "The impact that someone like John Coltrane had on the music... has jazz had anyone one like that in the last decade or even fifteen years, because I'm thinking, 'Not really.'"

Steve Kraske, my favorite radio talk show personality, posed that question on his KCUR program last week. (Download a podcast of the April 29 show here.) Although Kraske's query wasn't directed at me, I'm compelled to respond.

Jazz's diminished popularity means that it's simply no longer possible for a jazz artist to have the impact Coltrane had in the '60s. That doesn't mean, however, that quiet revolutions aren't occurring at this very moment. Two contemporary trends, I believe, qualify.

The first is the exciting wave of classically-influenced jazz that's presented and recorded with a rock sensibility. Key figures in this movement are the Esbjorn Svensson Trio, The Bad Plus, James Farm, and Brad Mehldau. Kansas City's Brad Cox is part of this scene.

The second "new thing" is the ongoing integration of hip hop and jazz. Robert Glasper and Nicholas Payton are obvious examples. Ryan Lee, Ben Leifer and Hermon Mehari of the locally-based Diverse are also in this camp. Kansas City's Mark Lowrey does a bit of both.

I'm certainly not the first to identify these developments but I probably qualify as one of the most enthusiastic advocates of both new schools. That said, my favorite jazz album of 2011 is Joe Lovano's Bird Songs. It has nothing to do with either trend.

(Original image of Ambrose Akinmusire sign by Plastic Sax.)
Posted by Happy In Bag at 7:36 AM

gee Happy. Thanks for reminding me of how sad I am about e.s.t. What a horrific fate, and such a loss. They were for my money on their way to becoming what everyone was looking for, bad-asses with the self restraint to not take masturbatory solos but instead remain completely within their ensemble aesthetic. And that whole dedication to ensemble playing is what I admire most in the best groups today. As I've said before, who gives a shit if you can play cherokee in all 57 million modes and have the entire slonimsky thesaurus memorized, if your music doesn't speak to me, then I'm not going to listen to it.

As for hip hop. True dat. The new Wu-tang drop, Antipop vs. Matthew Shipp, Vijay and Mike Ladd. Funny how its usually always a one-off collabo and then they go their separate ways, or they actually never even work together ala MadLib and the blue note vaults. Why? Probably because commercial hip-hop is so discardable. I'd like to see Usher and Keith Jarrett make a record. Or perhaps Andre 3000 with Dave Douglas.

Phonologotron with Rich the Factor.

Bobby Watson, Keith Jarrett and Dave Douglas can musically hang with anyone. They are at another level.

The cats you want them to collaborate with can't.

It would be one thing to devalue Cherokee and the Thesaurus if you had them under your fingers and were just making a concious choice not to use them.

Hate to be the one to point it out but jazz/hip hop fusion has been going on since the 1980s and classical informed jazz performed with a rock sensibility was even more popular back when Weather Report was doing it.

When players began playing bebop after their swing band gigs, THAT was an innovation because it was a truly original development instead of a facile "fusion" of some other style.

The Phonologotron, I don't know you, but I gotta say--literally every comment of yours I've read dismisses standards and/or tradition and/or practicing in some way. I don't get it.

Thanks for the post Phonologman.
You confirm my point.

because my whole life I've tried and tried but never really felt an honest connection to that tradition of music making. I've always felt dishonest in some weird way, as if by knowing that I couldn't possibly contribute anything of real value to it like the players from the past who defined it. add to that the knowing that it takes forever to truly master anything... so I guess it's impatience and insecurity and sometimes boredom that drive me to fail again, but hopefully better

or could this just be my rap persona.....

Phono,
You're quite an impressive wordsmith!

is that supposed to hurt my feelings?

Most of the jazz that has been coming out recently has involved other styles in a very organic way-- at least with the artists that are generally acknowledged as making big statements with their music. Examples in my opinion would be Lionel Loueke, Gretchen Parlato, Esperanza Spaulding, Ambrose Akinmusire, Logan Richardson, Jason Moran, and Nasheet Waits. They all sound very different and have diverse influences but what they have in common is that they use the music that they grew up with in their interpretation of jazz music. I highly doubt they specifically said, "Let's play jazz and mix it with hip hop" (or other variations of that). They play what they know-- which is what some of them have actually told me.

"Jazz" music started out at as a blend of genres... and beyond that-- the guys who we revere as the greatest innovators hated labeling the music (Charlie Parker, Miles Davis, Duke Ellington, etc).

Also... I find it interesting that Ambrose's name isn't on the actual promo image...

I'm well aware of the precedents, Anon 643. And yeah, I always liked Herbie Mann. But as Anon 738 articulated so well, artists are now succeeding where others- Herbie included- often faltered.

I'd invent Phonologotron if he didn't already exist. I love him. And I concur with this: "(I)f your music doesn't speak to me, then I'm not going to listen to it."

Call me a snob, but virtuosity speaks to me. And that certain emotional sincerity and depth that can only come from years of focused practice speaks to me. And if you haven't put the time in, we can tell. Or at least I can.

Not putting Phonologotron in this category, because like I said, I don't know him. But I'm disappointed in how many young musicians are squeaking and squawking because they didn't have the dedication to learn the nuts and bolts of the music, and then pretend that that was an artistic choice, and that playing over standard chord changes is antiquated. I'm highly skeptical of these individuals. Maybe I'm closed-minded.

Oh I've had plenty of years to study Michael, enough for two pieces of paper with my name on them. I just studied the "wrong" thing sometimes. And I've got plenty more years left before I could probably even touch you. I'm not a big fan of pretending either, which is why my practice routine still includes Aebersold and scales in fourths and fifths and etc. And ear training and sight singing and learning tunes that I like. My main point is for me music is about working with others and making something greater than yourself, thats all. Sure we always strive to make ourselves better player/readers/composers etc, but I know I've succeeded if the people I work with come out the other end as better musicians. I've actually had several tell me that learning to play my parts made them a better player. Besides, music is a prostitute anyway. She serves whatever purpose you want her to, and she's got this really nice sliding scale.

Thanks for clarifying--I think I agree with you. And I certainly hope I didn't posture myself as some sort of authority on music.