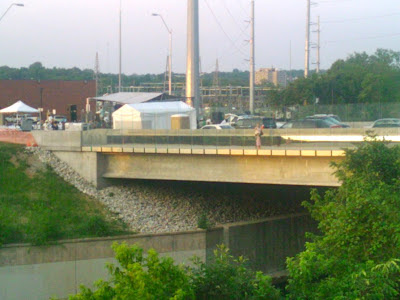 *From a flyer provided by a friend: Welcome to the Gold Star Lounge, the "New Home for Metro K.C. Jazz". Our opening night will be May 5, 2012 at 7pm with Sons of Brasil opening our new Jazz Venue.  Please come and join us for our Happy Hour from 5:00pm to 6:30pm and our outstanding food selections on our newly created menu which will be offered from 6:00pm to 7:30pm.  Suggested donation for show is $5.00. We will also be selling ticket at $35.00 per person for our Dinner Shows featuring such performances from the McFadden Brothers, Angela Hagenbach and so many more.  I've added the the shows listed on the flyer- including a Bob James gig on May 20- to The Kansas City Jazz Calendar.  Alas, the venue lacks a web site and Facebook account.  Here we go again.

*Hearts of Darkness has a Kickstarter campaign to help raise funds for its second album.

*Ashley Hirt is the subject of an excellent Black House Improvisors' Collective interview.

*The People's Liberation Big Band is admired by KCJazzLark.

*Here's more from the recent I Rock Jazz interview with Bobby Watson.

*Michael Shults is pictured and interviewed in the June edition of Downbeat magazine.

*T.J. Martley and Bill McKemy go hard at a Barnes & Noble in Leawood.

*Hearne Christopher reports on activity in the space once occupied by Jardine's.

*Lisa Henry is quoted in a preview of Aretha Franklin's appearance at Helzberg Hall.

*Here's a track from the forthcoming Pat Metheny album.

*The Bob James Jazz Festival is Saturday, May 19, in Marshall, Missouri.

*Tweet o' the Week: Django McTunes- It is a little known fact that Chris Getz of the Kansas City Royals is the son of jazz legend Stan Getz. #FakeRoyalsFacts

*Comment o' the Week: Matt Leifer- Uhhh...I'm not one to defend politicians, but I believe that the bridge leads somewhere, specifically, the other side of Brush Creek. Since when is infrastructure a waste of money? Get a grip.

*From Stan Kessler: We are having a joyous celebration of the life of Bill Caldwell, May 20, 2pm at The Blue Room. This is for those of us who knew & loved Bill, but could not make it to the funeral… Here's the format: Short set of tunes recorded by Bill by host band-Me, Kerry Strayer, Everett Devan, Bob Bowman, Mike Warren, (Jerry Hahn?). Remarks & stories by friends & family. Jam session  Tunes from Bill's CD projects played intermittently throughout.  The idea is for this to be fun and light, as Bill would have wanted it. This will last about 2 hours. There will be his CDs for sale, and part of the proceeds go to his wife, Kim, to help defray funeral costs.

*From Michael Pagan: Kansas City Youth Jazz organizers have re-set their annual MASTERS OF JAZZ fundraiser for 6:30 PM on Sunday, June 10, 2012 in Room 19 of the Education Center on the Metropolitan Community College Penn Valley campus… The event will include dinner and music provided by the Abel Ramirez big band and KCYJ groups for listening and dancing. Tickets cost $75 per person. A Patrons’ Party/reception will take place at 6:00 PM for donations of $150 or more. Dance only tickets will be available for $20. All proceeds will benefit Kansas City Youth Jazz.

(Original image of the new Troost Avenue bridge by Plastic Sax.)
Posted by Happy In Bag at 10:16 AM