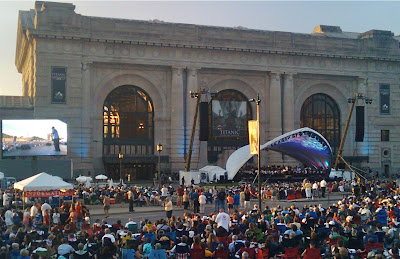 Tens of thousands of people heard Bobby Watson perform as a featured guest artist at Sunday's Celebration at the Station.  Thousands more will take in the public television broadcast.

It was a nice showcase for Watson, a man who's mentioned at Plastic Sax almost every week but isn't necessarily known among the general public.  Yet not everyone present on the expanse between Union Station and Liberty Memorial was prepared to recognize greatness.

"Bring on the fireworks!" a yahoo sitting near me shouted as Watson interpreted "Amazing Grace."  Watson also played "America the Beautiful."  For those situated several hundred yards from the stage, the concert was more of a rumor than a proper listening experience.

I applaud the Kansas City Symphony for featuring Watson on Sunday and in its pops series next February.   It'd be great for both the Symphony and for the city's jazz scene if it included a locally-based jazz artist at every Memorial Day concert.   As I was surrounded by people who refused to STFU as the Symphony performed, I  speculated about other locally-based jazz artists who might take Watson's place next year.  Ideal candidates will have the capacity to sight-read, possess a track record of artistic innovation and know how to connect to a large audience.

I'd encourage Frank Byrne or Michael Stern to consider hiring any one of the past three recipients of the prestigious and coveted "Plastic Sax Person of the Year" designation.  Jeff Harshbarger, Mark Lowrey or Hermon Mehari would almost certainly excel in a Memorial Day collaboration with the Symphony.  Readers are welcome to make additional suggestions.

(Original image of Bobby Watson performing at the Celebration at the Station by Plastic Sax.)
Posted by Happy In Bag at 5:43 PM

it seems to be your luck sometimes, hap, that you encounter loud-mouthed morons, unruly kids, or some kind of invasive drunken behavior at these outdoor events. *sigh*

I doubt it has anything to do with luck.

If you get ten thousand people together in one place, at least five thousand of them are going to suck.

a rather pessimistic view, 9:22, but you're probably correct.

When was the last time you found yourself in the middle of a sizable crowd and weren't turned off by the manners/hygiene/attitude of everyone around you?

I can't think of one. Maybe that's just me.