Review: The Meet Me at the Bridge Festival 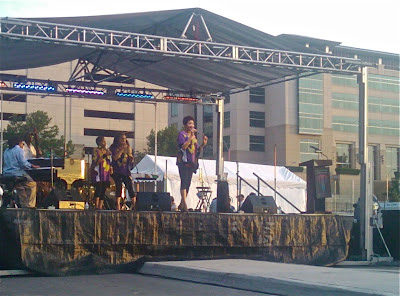 I had a nice time at Saturday's Meet Me at the Bridge festival even though I quickly realized that very few of the approximately 250 people in attendance were there to hear performances by several of Kansas City's elite jazz musicians.  The free event was actually a community gathering that just happened to feature jazz.

The commemoration of a new bridge on Troost Avenue immediately north of the UMKC campus served as a public forum for a host of politicians, community organizers, educators, environmental advocates and representatives of neighborhood associations.  Anyone not familiar with the cultural implications of Troost is encouraged to watch the trailer for  We Are Superman.  And yes, the filmmaker was on hand to pitch his documentary.

So many speakers crossed the stage and so many clipboard-toting activists worked the modest crowd that I wondered if a friend and I weren't the only people present who weren't directly connected to the event.

I caught two acts in the two hours I spent at the bridge.  Pamela Baskin-Watson, Nedra Dixon and Angela Hagenbach are the members of the relatively new ensemble Book of Gaia.  The ambitious trio was backed by trombonist Karita Carter, pianist Eddie Moore, bassist Tyrone Clark and drummer Mike Warren.

"We are ladies on a mission," Dixon explained.  "We're striking out on a fearless path."

The trio combines the socially conscious themes also explored by Esperanza Spalding on her new Radio Music Society album with a classic sound inspired by Lambert, Hendricks & Ross.  Book of Gaia's rarefied approach doesn't appeal to everyone, but it could go over extremely well in the right setting.

I also heard the first set of a band co-led by David Basse and Bobby Watson.   The pair were joined by trumpeter Hermon Mehari, saxophonist Steve Lambert, trombonist Ben Sailor, pianist Joe Cartwright, bassist Ben Leifer, a percussionist I didn't recognize and Warren on drums.  Although he fired off a couple typically dazzling solos, Watson mostly relegated himself to section playing.  It's one of the few opportunities I've had to hear Watson in that context.  The band's repertoire included standards like "Smack Dab in the Middle" and "Moanin'." The latter selection can be heard in the background of a solid report from Fox 4 News.

Mildly disappointed that no one invited me to join the evening's cavalcade of speakers, I left before the band resumed.

(Original image of Book of Gaia by Plastic Sax.)
Posted by Happy In Bag at 9:33 AM

Mr. Sax, the reason you didn't get invited to speak is because you have integrity.

Sly James and Cleaver couldn't manage an ant farm....well, if past performance is indicative of the future.

Green energy, sustainability, Federal Stimulus money. You combine those three and we have a bridge to nowhere.

Uhhh...I'm not one to defend politicians, but I believe that the bridge leads somewhere, specifically, the other side of Brush Creek. Since when is infrastructure a waste of money? Get a grip.

I agree with Matt. As someone who spent nearly 18 years growing up one block EAST of PROSPECT Avenue on 61st street, I perhaps have other thoughts than most about what TROOST means to me.

Where was the feasability study? Just another handout from the federal government without any accountability. I used to live one block west of Troost. Throwing government money at things never works. Thats why we still have welfare after all of these years. So many zealots so little time.