Review: The KC Sound Collective at the RecordBar 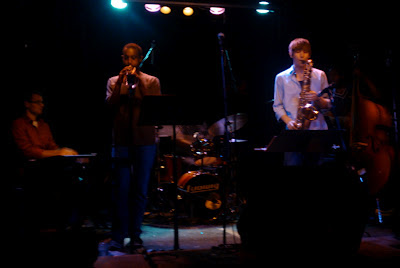 Perhaps the most radical aspect of the KC Sound Collective is the ensemble's conservative approach.  Consisting of five of Kansas City's most notable young jazz musicians, the band carefully hews to the hard bop tradition.  While each member excels at playing in less conventional contexts, the Collective elects stay within the familiar framework codified half a century ago.

As I noted in my review of the band's debut performance last year, the band's brash sound is in the tradition of Art Blakey's Jazz Messengers.  Only the electric keyboard played by Andrew Ouellette at the band's album release show Sunday at the RecordBar betrayed the formula.   About twenty people- over half of them prominent musicians- caught the quintet's first set.

The lion's share of the soloing went to saxophonist Steve Lambert, trumpeter Hermon Mehari and Oulette, but the excellent work of bassist Dominique Sanders and drummer Brad Williams represent much of the Collective's appeal.  Sanders is also the composer of the band's most striking composition.  The freeform opening of one of his pieces reminds me of vintage Pharaoh Sanders.

I have yet to hear it, but the Collective's new album In the Moment almost certainly documents the compositional talent of Sanders and his bandmates.  It'll be available when the band performs Thursday, May 24, at the Blue Room.  An appearance by the Collective at the venue, incidentally, was my my favorite jazz gig of 2011.

"Twenty people, over half of them musicians"-is not a good sign.

There were a bunch of things going on Sunday night, and I think you can look at it in a different perspective - that over half of the crowd were musicians shows how much respect these five guys have. There's another show Thursday night at the Blue Room if you happened to miss the Record Bar hit.

I'd like to read about a jazz show turnout that said "over half of them women." That would be a much better sign.

Another perspective could be that the music is designed to get respect from other players and may not have much to offer a lay audience.