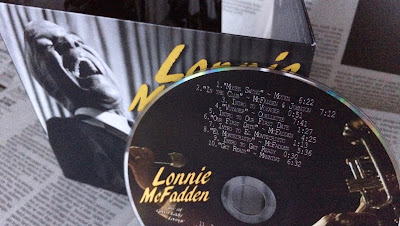 Lonnie McFadden’s Live at Green Lady Lounge will immediately become the most indispensable souvenir for visitors to Kansas City when it’s released later this year.  The recording- a winning blend of cornball shenanigans and refined artfulness- captures the festive atmosphere at a raucous Kansas City jazz club.

McFadden has long been admired as the trumpet playing component of the Las Vegas-style duo The McFadden Brothers.  He acknowledges his act’s association with Wayne Newton in the introduction to “What a Wonderful World,” but the album’s occasional bouts of acute sentimentality are balanced by fiery straight-ahead jazz.

“In the Club” is a funky instrumental co-written by McFadden and bassist DeAndre Manning.  “Voyager” is a fiery showcase for pianist Andrew Ouellette.  Drummer Tyree Johnson rounds out the outstanding young band that motivates McFadden to apply his often underutilized jazz chops.

By the time he breaks into his signature tap dancing on the final selection of the 67-minute album, McFadden has convincingly demonstrated that he’s more than an outstanding entertainer.  Live at Green Lady proves that McFadden is a bona fide Kansas City jazz cat.

(Original image by Plastic Sax.)
Posted by Happy In Bag at 11:00 AM