An Art Gallery, a Baptist Church and a Rock Club: Notes From Three Unlikely Jazz Performances 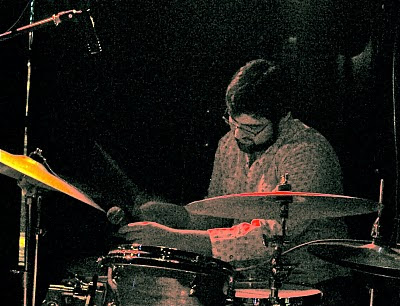 Some of the most intriguing jazz performances take place in the unlikeliest of places. The results, as the following notes indicate, range from heavenly to hellish.

One of the most encouraging trends of the past 18 months is the increased number of jazz bookings at The Record Bar. The intimate venue offers excellent sound and lighting.

The promotion of shows at the indie rock-oriented club is often the responsibility of the artists. That's where this gig got a little dicey. Even on the day of the show, the venue's site maintained that the People's Liberation Big Band was providing the evening's entertainment. Much to the dismay of many, including one of my colleagues, it wasn't the case. Thankfully, keyboardist T.J. Martley took the trouble to inform me via Facebook that he'd be playing in a group led by drummer Sam Wisman (pictured above). Saxophonist Matt Otto and bassist Seth Lee would also be on hand to pay tribute, Markley indicated, to Lennie Tristano.

They were fiendishly good. The attack on Tristano classics like "317 E. 32nd" and "Crosscurrents" ranged from prickly to lyrical. "Lennie's Pennies" resembled music from a cocktail lounge that specializes in absinthe. So stunning was the playing of Matt Otto that I'm seriously considering going Dean Benedetti on him.

Although the group specializes in difficult music that will never appeal to a massive audience, it was a shame that only about 30 people were on hand to hear their first outing. The majority of the meager crowd were other musicians and the band's family members.

It's no coincidence that links to Wisman and CrossCurrent, the unfortunate name for the ensemble, aren't provided here. They don't exist. As regular readers of Plastic Sax already know, that lack of basic promotional work infuriates me.

While I'm deeply annoyed by Wisman's indifference to promotion, I almost lost my mind during a nightmarish outing by Black House Improvisors' Collective at a downtown art gallery. I continue to rave about their exciting debut last October and I had been eagerly anticipating their second gig. This version of the collective included ringers Chris Burnett and the aforementioned Otto (pictured below).

So how was it? Beats me. I couldn't hear a damn thing. The room was packed with hipsters (above). Their shenanigans completely drowned out the band. I'd hoped they'd leave for a space where a DJ was spinning The xx, but the oblivious bohemians stuck around.

Thankfully, the performance was recorded by someone who was able to filter out much of the noise. Download it here. The collective is also booked at The Record Bar on January 31. 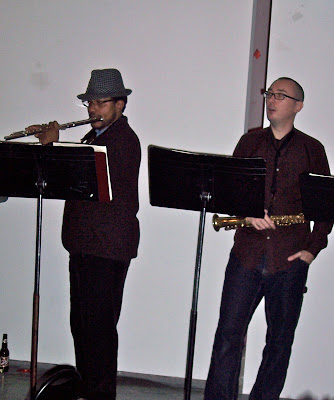 The senior recital of UMKC jazz student and Diverse saxophonist William Sanders (below) was immensely rewarding. Sanders' playing ranged from the soul-jazz of Gene Ammons to the spirituality of John Coltrane. His sensual work on "B-Day Song" suggested that he forgot he was in a (acoustically perfect) church. Zachary Sanders (presumably William's brother) assisted on drums. Much to the consternation of the wonderfully expressive keyboardist Karren Schiele, Diverse's brash drummer Ryan Lee sat in on one song.

Sanders' presentation didn't end when the music stopped. He noted that it was no accident that the program included hymns like "Just a Closer Walk With Thee" and "Jesus is All the World to Me." He offered stern testimony about his faith. While I don't share Sanders' perspective on salvation, I found his plea refreshing. And the music? Sanders' heartfelt performance might find a spot on my year-end top ten list. 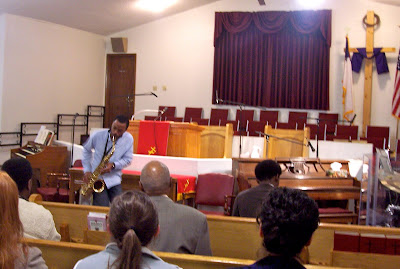 (Original images by Plastic Sax.)
Posted by Happy In Bag at 2:08 PM

I just get complaints when I try to perform my tuba in my kilt. Something about my leaky spit valve. *shrugs*

@HIB - Your statement: "So how was it? Beats me. I couldn't hear a damn thing. The room was packed with hipsters (above). Their shenanigans completely drowned out the band." cracks me up...

But, you know something, I think that was the nature of the Paragraph as a venue for the BHIC concert. I was not surprised by the seeming cacophony of sound happening around our performance. The closest thing to "annoyance" for me as a performer was the (same) two girls who insisted upon walking through the band to go to the bathroom during the course of our performing... My blog on this concert is here - includes an audio widget.

I am looking forward to the concert at the recordBar on Jan 31st by the BHIC. It will be interesting to have the music performed in an actual listening venue. I hope you come out to that performance as well. Although the purpose of the BHIC is not necessarily to perform concerts, I do think that this is a more accurate reflection of where the music is today... It would be nice if we could be welcomed at some of the more established listening venues in KC like the Blue Room and Jardine's too...

Thanks for the mention in your blog.