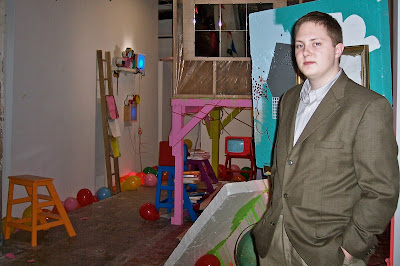 I've attended innumerable music performances by students. They're alternately charming and tedious. I was startled, consequently, when a remarkable solo jarred me from a daydream at an outing by a high school jazz band in 2008. A kid was quoting Charlie Parker like he actually meant it.

It was Matt Chalk.

I've monitored his progress from a distance ever since. When I saw Bobby Watson greet him like a respected colleague a couple weeks ago, I realized it was time to learn more about the promising 18-year-old. He's performing at the Grammy Awards in a couple weeks and will go on tour this spring as a substitute member of Diverse.

Plastic Sax: I usually know quite a bit about the musicians I interview. Largely because you're a in high school student, you're an exception. I've heard your solos with the Shawnee Mission East bands and with other ensembles around town. Not to take anything away from any of your classmates, but you are clearly a more mature and thoughtful player than most kids. Do you take music more seriously than your peers?

Matt Chalk: I can't be sure that I take music more seriously, but I feel I am very dedicated to it. I can recall the first time I played something jazz-like, not even a year into playing the horn. Something definitely clicked inside of me; I was immediately drawn to the music. I spent a lot of time as a younger kid listening and observing and absorbing everything I could about jazz. At the time (and perhaps even now), most of my friends were all caught up in sports and video games and what not. So in that sense, I was kind of ahead of my peers even then.

PS: Do you think of yourself as "gifted" or do just practice and think about music a lot?

MC: I wouldn't say I am gifted at all, I've just had a lot of early exposure and worked a lot of things out on my own. But yeah, I'm constantly thinking about music. To me, there is nothing more important than music, whether I'm listening or practicing or writing or performing. It is something that has always been inside me, even though I didn't know it until I discovered it.

PS: I see you gigging around quite a bit- sitting in at jam sessions, playing with New Vintage Big Band, New Jazz Order, etc. Can you detail everything you're involved in?

MC: Well, I'm a regular now in both of those bands, which is a great opportunity I am really thankful for. Being in those bands have really helped my reading chops. But other than that, the practicing and networking is really starting to take root and more small group opportunities are starting to open up. I've lead my own groups, and been a sideman in other small groups. This spring, I'll be out more often with other groups as a sideman, which has been one of my career-long goals. There are plans for a brand new group made up of Ben Leifer, Matt Hopper, Ryan Lee, Hermon Mehari, and myself. I hope that the group finds a place to play, I really like those guys and it would be a good experience for me. It's fun to start to see my goals take shape. Stay posted for more to come!

PS: I shouldn't assume that you're purely a jazz guy. For all I know, you're also in death metal and ska bands. What are your musical interests?

MC: Right now, I am really focusing on my jazz playing. I don't really see myself becoming as devoted to any other genre as I do jazz. But I really like funk, reggae, R&B, and world music, and these have all influenced my playing to a certain degree.

PS: Is high school band good for an aspiring musician? Does anything productive come out of being involved in marching bands and pep bands?

MC: As a freshman and sophomore, I really enjoyed high school band: symphonic band, orchestra, marching band, pep band, the whole bit. But as I started to get more and more involved around town by the time I was into my junior year, band had began to be sort of unfulfilling to me. It has had it's purpose, and I can't be more happy with my experiences in high school band. But I really enjoy doing my thing with the older cats too.

I saw Bobby Watson walk off the bandstand to shake your hand the other night. What's your relationship with him?

MC: I first met Bobby years ago when I was just starting to get into jazz, through Leon Brady's Kansas City Youth Jazz Band program. He came and sat in and we got to play with him at a few festivals. I have also participated in the UMKC Jazz Camp, where I was able to work with him one on one. Recently, I've been fortunate enough to take some lessons from him, and plan to in the future as well. I really really respect him as a musician and a person, and he was one of those guys that really got me into it and inspired me. And each time I hear him or see him, I feel the same way; inspired to work harder and really take my musicianship to the next level.

PS: It's my understanding that your mother is a jazz vocalist. Is that correct? What role did your parents play in your musical development?

MC: Yes, my mother Laura Chalk is a jazz vocalist. She is the one person who has always helped me and supported me along the way. Subconsciously, she really pushed me as a younger musician. I knew that one day, once I was good enough, I would be able to play gigs with her. That's what I wanted more than anything, to play a gig. So I worked and worked, and eventually, by the time I was 13 or 14, I was playing with her at clubs all over town. She would always hire the best musicians too, which was a huge benefit. Being able to play with people like Bob Bowman, Danny Embrey, Paul Smith, Roger Wilder, and others at such a young age really exposed me to what jazz is all about. It was such a blessing to have had those opportunities, and is something I am very thankful for.

MC: It all started with Bird. That's all I listened to for years. He was and still is a huge inspiration. But more recently, I've been getting into a lot of Coltrane, Kenny Garrett, Jerry Bergonzi, Joe Henderson, Wayne Shorter, Vincent Herring, and of course everyone else. You can take inspiration from anyone or anything. But I certainly love to listen!

PS: Who are your favorite Kansas City-area musicians? And if you could form a dream band of local players, who would be in it?

MC: Matt Otto. Matt is one of those guys who is also an amazing musician and person. I really like his playing, especially his shapes. He uses a lot of wide intervals, but not to the point it seems angular. He is such a deep, logical player. I really dig that. Matt would definitely be in my dream band. I also really like Hermon Mehari's playing. His concept is also something I really admire about his playing. He says something with each solo. He tells a story each time he plays. That is something of Hermon's I have been inspired by, and attempt to incorporate when I play. Roger Wilder would be the pianist. I took some lessons from him over the summer, and he is really top notch. He knows so much!! If you catch him in the right setting, be prepared to be blown away. On bass it would either be Bob Bowman or Ben Leifer. I've known Bob for a long time, and he is truly one of the best musicians in town, regardless of the genre. And I really like Ben's playing and I feel comfortable playing with him. On drums, I'm not sure who I would have, Kansas City has a lot of great drummers. I like Sam Wiseman a lot, and Ryan Lee. I've played with Ryan a lot and each time, Ryan really pushes me to places I would have never gone before. Also, Brian Steever. Look out for Brian. He's young but he sounds so mature and has a loose feel, but he swings hard!

PS: You've been honored for your work with the Shawnee Mission East band. Please list the awards you've received.

MC: Our jazz program has been to many regional festivals, we try to go to about two or three a year. We have been to the Baker Jazz Festival, Missouri State Jazz Festival, the Drury Jazz Festival, and a music festival in Winter Park, CO, among others. Since I joined the program in 2007, each one we went to I was named the outstanding soloist of the festival. I also was named to the 2009 Telluride Jazz All-Star Ensemble, a group selected by audition. The eight of us all convened in Telluride CO. for a week last summer and played in clubs in town and also performed twice at the Telluride Jazz Festival. We got to meet Bill Frisell, Donald Harrison, Christian Scott, Greg Osby, Jimmy Herring, and others. That was a neat experience. But just recently, I was chosen as one of the members of the 2010 Grammy Band. I can't wait for that!

PS: You're going to the Grammys! Can you explain how that came about? Do you know what you'll be performing there? If you could have a serendipitous encounter with any one celebrity at the Grammys, with whom would it be?

MC: Yeah, that was by audition too. They picked about 18 or so musicians for a big band from all across North America, and I was lucky enough to make it. They fly us out and for about a week and a half and we play, play, play. We'll be playing at several clubs throughout the week, and at different events including the awards after party. We'll be performing with jazz legends James Moody and Kenny Burrell and others, so we're playing some of their charts. And if I had an encounter with someone, I would have to pick one of the living legends who might be there. Maybe like Wayne Shorter or someone. But that's kind of greedy to say, considering we'll be playing with James Moody and Kenny Burrell!

PS: Do you intend to pursue music as a career? Have you made any post-high school plans?

MC: Music is the only thing I can do (haha). I definitely want to pursue music as a career. After high school, I plan on moving to New York City to go to school. I just got my audition dates for Manhattan School of Music and the New School, so I'm hoping I can get a scholarship to go there!

(Original image of Matt Chalk at the Paragraph Gallery by Plastic Sax.)
Posted by Happy In Bag at 9:22 AM

You were there, HIB? What did you think of the BHIC concert?

Yes, Chris, Matt Chalk and I were there. My thoughts and observations (along with a photo of you and Matt Otto) will eventually be published at Plastic Sax.

Cool, Bill, I hope you enjoyed it. I really did and it made me very optimistic finding that progressive group of musicians to perform with and write in context for...