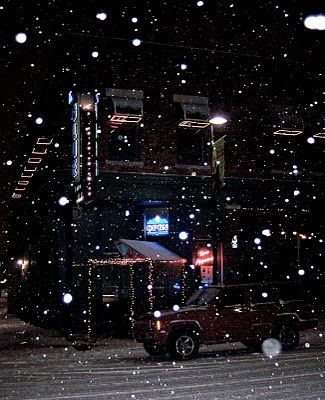 *But who aside from Plastic Sax would point out that Jason Harper took a gratuitous swipe at Kansas City's jazz scene in his final column as the Pitch's music editor? "Efforts to revive the old music through appeals to noble concepts, such as 'heritage,' have been hugely ineffectual (the sad Jazz District)," Harper suggests. And who else would note that he agrees with Harper's sentiment?

*Before taking umbrage at my previous statement, note that Harper's, the charming restaurant directly across the street from The Blue Room, has closed.

*Doug Tatum is leaving his position as The Folly Theater's executive director.

*The Black House Improvisors' Collective site features a revealing interview with Russell Thorpe. An interview with Matt Otto is less successful. The ensemble next performs on January 15.

*"I hesitate to call myself a jazz singer," Ida McBeth tells John Kreibergs. "There always seems to be someone that'll say, 'She doesn't sing jazz; she sings R&B' or 'She sings gospel.' Instead, I prefer to call myself a song stylist." Read the rest of the excellent portrait of McBeth here. And Hearne Christopher remembers an old story concerning McBeth.

*KCJazzLark shares wonderful photos of Diverse. While it lacks the same degree of artistry, I'm rather proud of the image I took on the same night.

*Can anyone vouch for John Stein? A press release says the "internationally renowned" guitarist was "born and raised" in Kansas City.

*Here's a rave review of a Deborah Brown performance in Europe. She's at the Blue Room on January 15.

*A blogger wonders about the career of trumpeter Carmel Jones.

*Sue Vicory announced that her documentary about Kansas City jazz and blues will premiere at the Gem Theater on May 6.

*A local blogger lists and ranks 43 albums and mixtapes released by Kansas City-area hip hop artists in 2009. How many jazz albums were released by local artists last year? A dozen?

*The 2010 schedule for St. Louis' Jazz At the Bistro is stellar. The Bad Plus and Vijay Iyer play the club in January. Lou Donaldson and Freddy Cole are among the artists performing in February. Meanwhile, Branford Marsalis plays a larger St. Louis venue next month. The organization also provides podcast interviews with Iyer and other visiting artists. Ahem...

*I really enjoy this rendition of Bobby Watson's "Lemon Cello" by a group of California students.

*It may be clumsy, but Plastic Sax's Kansas City Jazz Calendar remains the best tool in town for jazz fans. Jazz advocates have particularly intriguing decisions to make Friday. Choices include Allen Toussaint at The Folly Theater, the opening night of the Jazz Winterlude festival and Mark Lowrey vs Hip Hop at the Czar Bar.

(Original image by Plastic Sax.)
Posted by Happy In Bag at 10:33 AM

You want a good Ida story then go track down Arny Young and ask him about a very young McBeth singing with a band he had called Advertisement For A Dream many, many years ago. Like when you were a pup.
There are a few of us around who remember this. Hearne is not one of them.

Never heard of the group, BGO. But look what Google turned up. There's even a quote from Steve Wilson.

I can vouch for John Stein being a KC native, and now a teacher at Berklee, I believe. He has several recordings. He's a tasteful guitarist, if not really exciting, to my ears ...