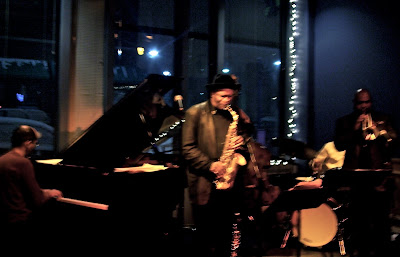 So deliriously rhapsodic was Watson's brilliant performance that I was prepared to abandon all other music as I sat ten feet from the stage of the Blue Room. Why listen to anything else? Watson and the all-star band Horizon were that good.

Watson's first solo of the night was riveting. The entire vocabulary of the jazz saxophone- including Jimmy Forrest's "Night Train," Ornette Coleman's new directions and yes, the living legacy of Charlie Parker- pour out of Watson when he's on. And was he ever on! I wouldn't have traded Watson for Sonny Rollins, Joshua Redman or Rudresh Mahanthappa.

His bandmates recognized that it was Watson's night. All sensational pianist Edward Simon could do was grin in admiration. The bop-oriented setting didn't give Simon many chances to showcase his true strength. Only during a sublime duet with Watson on "Love Remains" did Simon offer a glimpse of his wholly unique combination of classical, Latin American folk musics and third stream jazz.

Watson was clearly inspired by the joyous drumming of Victor Lewis. An animated musician, Lewis knowingly smiled as he pushed Watson and trumpeter Terell Stafford, punctuating their solos with emphatic grunts. The supple bass work of Peter Washington, one of jazz's most unselfish stars, was stellar.

Only Stafford seemed frustrated with Watson's dominance. A tremendous player, his position of Director of Jazz Studies at Temple University makes him the equivalent of Watson in Philadelphia. His solos became increasingly brazen. While a couple of his efforts inspired Watson to dance a la Thelonious Monk, it was no use. Watson was untouchable. Even the saxophonist's support work behind each soloist added intriguing depth and unexpected textures to the performance.

It's not for nothing that Watson was recently named the Plastic Sax Person of the Decade.

Could I have experienced my favorite live performance of the year just 48 hours into 2010? It's quite possible. Many in the audience of approximately 125 might agree. Steve Paul was one of them. His proper review of the show is no less enthusiastic.

(Original image by Plastic Sax.)
Posted by Happy In Bag at 12:52 AM

I don't want to get dragged into a music nerd discussion, Mike, but I intended to convey the concepts detailed in this definition.

Steve Paul missspoke in his anology about The Peacocks with Getz and Rowles. I believe Stan played tenor sax on that cut. A superb album nonetheless.

didn't know what was i getting into asking the question. yikes, that's a heckuva defintion! bit too egghead for me, but i appreciate the concept (and the link!). thanks happy! - mike

I've had the upmost pleasure seeing Mr. Watson last year. Fantastic performace. I'm really excited about seeing McCoy Tyner for the first time this Friday! I believe he is at the Highline Ballroom here in NYC.

Every thing I have heard from Bobby just blows me away. I did not see the show Happy, but I will take your word for it. Can't say enough about the musicianship and talent of Mr. Watson. Thanks for the blog.