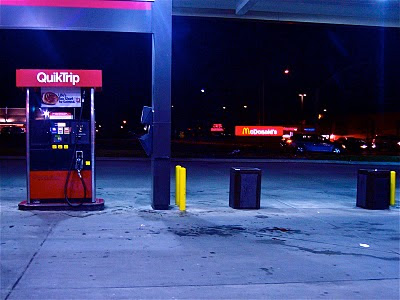 *Steve Paul investigates Pat Metheny's robots and lives to tell about it. I'm also impressed by this Metheny-related post.

*According to this business story, "there will be live jazz" at a new Johnson County restaurant.

*The appearance of the late Claude "Fiddler" Williams' instrument at Mark O'Connor's concert at the Folly Theater provided quite a moment. Here's a review of the performance.

*From an email solicitation for a February 7 show at the Record Bar: The People's Liberation Big Band celebrates Super Bowl Sunday by performing the Who's halftime show. I really hope they're not kidding.

*The event is posted on the Kansas City Jazz Calendar, but Plastic Sax readers might appreciate this reminder that Randy Weston is performing February 4 at the American Jazz Museum.

(Original image by Plastic Sax.)
Posted by Happy In Bag at 12:48 PM

I am glad to hear that Candace Evans is kicking off the JUCO Jazz Series. I've missed seeing her around town and am looking forward to her performance.

I am so pleased to see that Candace Evans will be back in Kansas City for a performance. Her steady presence on the jazz scene has been missed.

The JCCC Ruel Joyce jazz series is a fine event. I'm happy to also see Carol Comer will be performing..don't see enough of her these days. Great pics of Deborah Brown here!