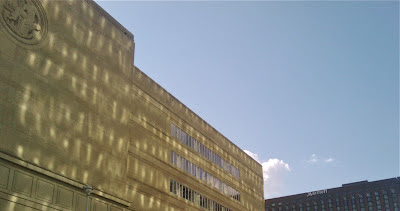 *A friend told me that he'd be a guest on Up To Date's "Best Music to Date of 2012" show on KCUR this Friday.  In an attempt to make Kansas City jazz a part of the conversation, I compiled this list of the Top Five Kansas City Jazz Albums of 2012 (So Far): 1. Matt Otto- Broken Waltz, 2. Project H- Become Light, 3. Pat Metheny- Unity Band, 4. Killer Strayhorn- One Begins to Wonder, 5. Chris Hazelton Trio- Peregrination.

*Hearne Christopher reports that Greg Halstead, the founder of Jardine's, has died.

*The Star provided a report on the All-Star game watch party at the American Jazz Museum.

*Inspired by coverage during the All-Star game broadcast, a television station talks to Ollie Gates about the renovation of the YMCA building in the Jazz District. (Via Tony's Kansas City.)

*The BBC highlights the Mutual Musicians Foundation in a travel piece about Kansas City's "renaissance."

*A Beach House concert caused Hunter Long to question the purpose of improvisation.

*Here's Ben Kynard's official obituary.  A resident of Gladstone fondly recalls Kynard in a letter to The Star.  I couldn't help but notice, however, that the sad news of Kynard's death has been ignored by most national jazz publications.

*Sue Vicory's documentary on Kansas City jazz will be screened at the Kansas International Film Festival in October.

*KKFI's new internet presence allows for quick access to the playlists of the station's jazz programmers.  (Tip via RH.)

*A set of wonderful photos of Claude "Fiddler" Williams is posted by KCJazzLark.

*Comment o' the Week: Sid Vicious- Hey happy, How can you recognize the superior musicianship of Bobby Watson and Matt Otto but then call the PLBB "arguably the best ensemble in the city"?  Thats like saying the best three soprano saxophonists to ever play the instrument are Trane, Branford and Kenny G.  You lose any kind of credibility when you make bone head assessments like that.  Sid

*From a UMKC press release: The University of Missouri Board of Curators has approved UMKC's Bachelor of Music in Jazz Studies. This addition to the Conservatory's degree program underlines the importance of the jazz program at the UMKC Conservatory. Directed by Bobby Watson, the jazz studies program at the Conservatory provides students with rich and varied experiences and opportunities to perform, travel, and work with some of the most important jazz artists working today, including Mel Martin, Donal Fox, Benny Golson, Roy Hargrove, the Mason Brothers, and many others.  The Conservatory Concert Jazz Band was number four on the national airplay charts with the recording of Bobby Watson's The Gates BBQ Suite. Jazz students are Betty Carter Fellows, teaching assistants at leading jazz programs throughout the country, Banff Artist Residents, recording artists and have won many of the world’s most prestigious jazz competitions.

*From Upper Room: The Swope Corridor Renaissance/Upper Room’s Eddie Baker School of Music will present Music Matters to benefit the children of its Music Program.  The musical event will be at 7:30 p.m. on Friday, July 27, at the Church of the Resurrection, 13720 Roe, Leawood, Kansas 66224… Featured performers of Music Matters are Mark Pender, Trumpet Virtuoso/TV personality from the Conan O'Brien Show; Lonnie & Ronald McFadden aka: The McFadden Brothers, celebrated dancer/singer/instrumentalists from the Wayne Newton Review; David Basse, nationally known recording artist; and Pamela Baskin-Watson, New York singer/songwriter.  Other performers are the children and staff from the Upper Room’s Music Program.

(Original image by Plastic Sax.)
Posted by Happy In Bag at 11:46 AM

had weasel cornflakes with powdery mildew for breakfast, shitting like an olympian let me tell you. dressed up pretty last week, felt all purple with the wool trousers. two separate ponytails emroidered oodles of ligaments amongst all the happy people. willing periwinkle into being taxes the constitution, a faint

Pat Metheny is from Lee's Summit, MO, not Kansas City. And also, I am fairly sure he moved away in the early 70's. You should pick another album for your Top 5 KC Jazz Albums of 2012 list.

Eulenspiegel, if you want to troll, take it from the master-you have to actually say thoughts in order to piss people off with them.