The Ghost of Christmas Present 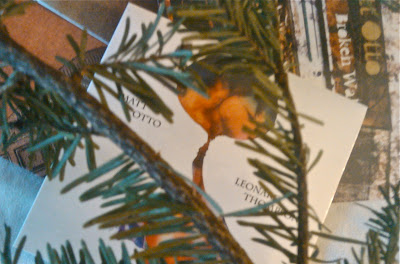 Am I Ebenezer Scrooge?  My good friend KCJazzLark seems to think so.  In a clever new post titled "A KC Jazz Christmas Carol, Part 1," he refutes this site's year-end recap with surgical precision.

I stand by my assertions regarding the diminishing audience for jazz, but KCJazzLark's eloquent take-down suggests that I may be failing to adequately share my enthusiasm for the music.  Fortunately, I need only go back a few hours for a vivid reminder of why I continue to espouse the ongoing vitality of the music being played on Kansas City's jazz scene.

A performance last night at the RecordBar was almost as good as anything I'd heard in all of 2012.  Brilliant saxophonist and composer Matt Otto led a band featuring visiting trumpeter Dave Scott, bassist Jeff Harshbarger and drummer Ryan Lee.  The quartet played some next-level stuff that continually astounded me.

Lee has never sounded better.  I recall giving him a hard time a few years ago for occasionally overplaying.  That's all behind him.  He and Jeff Harshbarger, Plastic Sax's 2011 Person of the Year, were endlessly creative.  I would have been happy to hear just the two of them play as a duo all night.  Yet Otto and Scott were similarly inspired.  The compelling new material Otto wrote for the gig enhanced the quiet power of his band.

I know KCJazzLark shares my passion for these musicians.  I also know that both of us will continue spreading the good news about these essential sounds in the new year.

(Original image by Plastic Sax.)
Posted by Happy In Bag at 2:55 PM